Bhupesh Baghel will hand over development works worth more than Rs. 600 crore to Bilaspur district 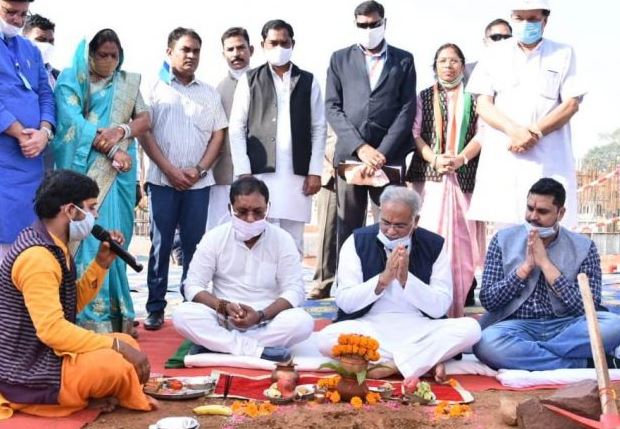 On January 3 and 4, Bhupesh Baghel will hand over development works worth more than Rs. 600 crore to the residents of the district during his stay in Bilaspur district. During this, the Chief Minister will inaugurate 142 works at a cost of 99.84 crores including the newly built Central Library, Smart Road, New Circuit House, Atmanand Excellent English Medium Schools and perform Bhoomi Pujan of 225 works at a cost of 414.79 crores.
The Chief Minister, Mr. Bhupesh Baghel will first inaugurate the three-storey Central Library at Nutan Chowk constructed by the Municipal Corporation Bilaspur at a cost of 6 crores under the Smart City Project. It is the first digital library in the state. In its stilt floor, parking area of ​​998 sqm for four wheelers and 365 sqm parking area on both sides of the building has been made for two wheelers. There will be an exhibition hall and conference hall on the ground floor. It has an incubation center. Where the youth will be helped to give a dimension to their start up. Attractive landscaping and lighting have been done around the Central Library.
After this, in the general meeting held at Shri Baghel Lal Bahadur Shastri School Ground, 142 works will be launched at a cost of 99.84 crores, Bhoomi pujan of 225 works at a cost of Rs. 414.79 crores, thus Bhumi Pujan and inauguration of 367 works at a total cost of Rs. 514.63 crores. In Bhoomipujan, 38 works of Public Works Department at a cost of Rs 178.38 crore, 7 works of PMGSY at a cost of Rs 49.06 crore, 7 works of Water Resources Department at a cost of Rs 174.38 crore, 50 of Rural Engineering Services costing Rs 5.56 crore. Work is included. Similarly in the inauguration works, 4 works costing 9.39 lakhs of Public Works Department, 4 works costing 2.02 crores of PHE, one works costing 1.23 crores of MMGSY, one works costing 6.12 crores of Water Resources Department, Public Construction works include 2 works at a cost of 51.41 crores of bridge, 5 works for 7.15 crores of Municipal Corporation Bilaspur, 6 works for 15.55 crores of Smart City Bilaspur.
Excellent English medium school will monitor Tarabahar
On January 3, Chief Minister Bhupesh Baghel will inspect Swami Atmanand, the excellent English medium school, Tarabahar. Tarabaar Higher Secondary School has been upgraded to English Medium School for the purpose of teaching poor children in a well-equipped English medium school like private schools. This school is running classes from class 1 to class 12. In which 560 students have been admitted. Here, the facility of modular furniture, modern laboratory, excellent library, sports resource is being provided to the children. Also, children will get education through excellent smart classes.
Inauguration of new rest building
Chief Minister Mr. Bhupesh Baghel will also inaugurate the new rest building built near the old circuit house at a cost of 6 crore 59 lakh. The plinth area of ​​this building is 2050 sqm. The building has 18 high rooms with 7 high rest rooms, thus a total of 25 chambers have been constructed. In addition, a meeting hall with a seating capacity of 150 persons has also been prepared.
Smart road launch
Under the Smart City Scheme, the first smart road of the city has been constructed in about 8 crore by upgrading the kerosene street. Which is named after Gaurav Padma Shri late Pandit Shyam Lal Chaturvedi of Bilaspur.
The unveiling of the statue of Padma Shri late Pandit Shyam Lal Chaturvedi at Rajendra Nagar Chowk.
The statue of Padmashri late Pandit Shyam Lal Chaturvedi will be unveiled in the Rajendra Nagar Chowk, near the smart road, from Chief Minister Mr. Bhupesh Baghel’s karkamal.
Bhoomipujan for construction of barrage at Shivghat and Pachrighat in Arpa river-
To provide revival of Arpa river by Chief Minister Mr. Bhupesh Baghel, water should be maintained in Arpa river throughout the year, along with increase in the water level of the city. For this, the foundation stone of barrages to be built in Shivghat at a cost of 49.13 crore and Pachrighat at a cost of Rs 48.98 crore.