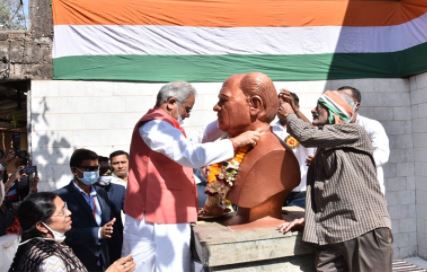 Bhupesh Baghel garlanded his statue on the death anniversary of former Bhilai-3 former MP Swa Chandulal Chandrakar on his death anniversary and paid his heartfelt tribute. He said that self in Chhattisgarh state formation. Chandulal Chandrakar is an important contributor. He agitated for the creation of the state of Chhattisgarh, held meetings and created mass public awareness. The Chief Minister said that Chandrakar had a special vision for the development of the state of Chhattisgarh. He always talked about the possibilities of horticulture here. Today, Durg district, which is at the top in the production of vegetables and fruits in the state of Chhattisgarh, has a significant contribution in the thinking of Chandulal Chandrakar. He also played an important role in Bhilai’s industrial development. Bhupesh Baghel said that as a sports journalist he saw the corner of the world. He took his Chhattisgarh asmita with him wherever he went. Always used to carry the typical khurmi with him even in foreign trips. Also never forget to take datun. Wherever he went, he took his father’s crate of iron. He was among the top journalists of the country, but never arrogated it. He spent a lot of time with Gandhi in the days of Birla House. Chandrakar’s contribution to the country service is important.