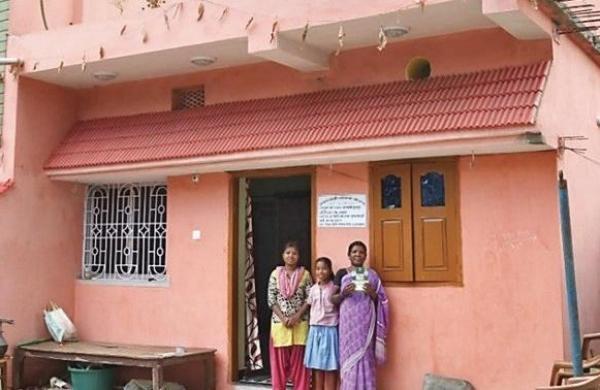 Express News Service
PM Awas Yojana houses named after daughters The Centre’s ambitious “Beti Bachao Beti Padhao” campaign has attained a new dimension in the Shajapur district of MP. Houses built under the Pradhan Mantri Awas Yojana in various villages have been named by the beneficiaries after their daughters. Many villages forming part of the Shajapur district panchayat have seen PM Housing Scheme beneficiaries naming their houses sanctioned in 2019-20 after their young daughters. Many villages, including Satgaon, Mohan Badodiya, Dhatarvada and Chauma, now have newly built houses, which the beneficiary families have named after their daughters.

BJP leader’s video asking people to sell liquor goes viralA political controversy erupted in the wake of a viral video on social media showing a local BJP leader asking people to manufacture and sell liquor with elan. In the video, which emerged from Niwari district, Anil Pandey was purportedly seen with people attending a feast to mark CM Shivraj Singh Chouhan’s birthday on March 5. The BJP leader is allegedly seen telling the guests attending the party to “banao khoob aur becho, par peeyo mat (prepare and sell liquor as much you want but don’t consume it)”. State Congress vice-president (media) Bhupendra Gupta, alleged that on one hand, the CM has claimed to have eliminated liquor mafia and on the other hand, a BJP leader is openly seen asking people to prepare and sell liquor. “Will the CM act against his party leader?” asked Gupta.

26 IAS officers on poll duty in 5 states, UT As many as 26 IAS officers from Madhya Pradesh will be deputed as central observers in assembly polls bound West Bengal, Assam, Tamil Nadu, Kerala and Puducherry. The Election Commission has fixed a virtual meeting of these observers on Wednesday. These IAS officers will attend the virtual meeting in the MP State Secretariat on Wednesday. The officers include three women — Alka Shrivastava, Sapna Nigam and Sarita Bala. They will be briefed about their roles and responsibilities by the Election Commission. Also, they are likely to be told about which state they are being sent to as central observers.

BJP MLA’s birthday bash turns battle groundTwo persons were killed following a brawl after the birthday party of a BJP MLA in Madhya Pradesh Damoh’s district. The incident took place around 10 pm on Friday at Banwar village under Nohata police station area during the birthday bash of Jabera MLA Dharmendra Singh Lodhi. The incident took place two days before President Ram Nath Kovind was scheduled to visit Damoh district to attend a series of events. Two of the deceased have been identified as 30-year-old Jogendra Singh and Arvind Jai. The police said Jogendra Singh died of a gunshot and Arvind Jai was “beaten to death by some persons with stones and sticks” as per the initial investigation. According to Damoh district police sources, the brawl broke out between a group led by one Kalyan Singh and a rival group led by Arvind Jain, just after the MLA’s birthday party. Four people have been booked in connection with the twin murders, two of whom have been arrested. Lodhi, however, denied any connection with the incident, saying it happened after he had left the party.