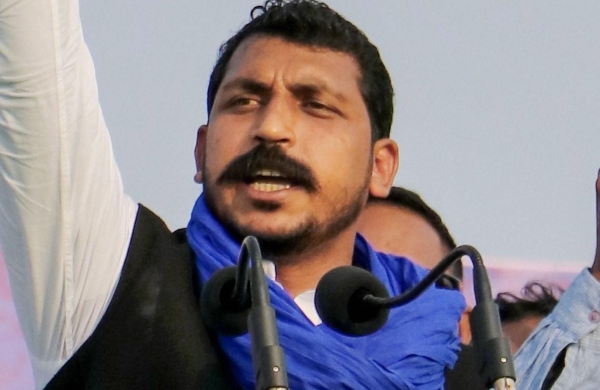 By PTI
NEW DELHI: Bhim Army chief Chandrashekhar Azad on Friday met farmer leader Rakesh Tikait at Ghazipur on the Delhi-Uttar Pradesh border and said the Dalit group will provide all help to strengthen the agitation against the new farm laws.

This comes a day after the Ghaziabad administration gave an ultimatum to the agitating farmers to vacate the UP Gate protest site in Ghazipur by Thursday night, even as farmer leader Rakesh Tikait remained adamant saying he would commit suicide but not end the stir Azad reached UP Gate around 6:30 PM with nearly 100 members of the Bhim Army.

The Dalit leader said Tikait is the “pride of western Uttar Pradesh” and he would fight shoulder-to-shoulder with the farmer leader.

“We stand firm with our farmers and will provide all help needed to strengthen their protest,” Azad said.

He claimed that the government will “try every trick to end this movement and instigate farmers to resort to violence”.

“I appeal to you not to deviate from the path of non-violence,” he said.

Earlier in the day, tens of thousands of farmers gathered in Uttar Pradesh’s Muzaffarnagar for a mahapanchayat in a massive outpouring of support for the Bharatiya Kisan Union-led protest against the three new farm laws in Ghazipur.

The mahapanchayat resolved to throw its full weight behind the protest at Ghazipur, where farmers have been camping for over two months to demand the repeal of the farm laws and a legal guarantee on minimum support price for their crops.