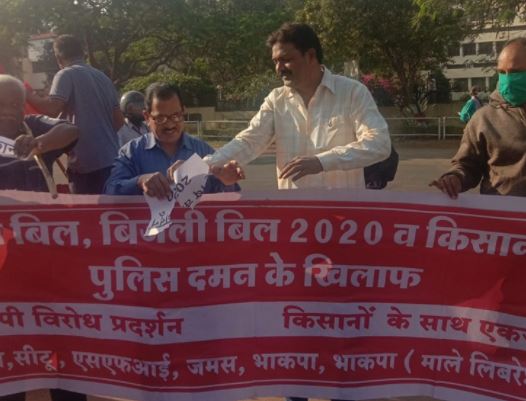 Three agricultural laws and four labor code copies were burnt and torn by Bhilai Steel Plant employees on Wednesday morning. The Left and their associated labor organizations expressed anger against the government. Shouted anti-government slogans. Employees demonstrated at the Murga Chowk in the main entrance of the plant with flags and placards in hand. Supported the peasant movement.

Expressed anger at the cuts being made in the workers’ officials. Venkat, Yogesh Soni, Jamil Ahmed from CPM, Vinod Kumar Soni from CIP, Basant Uike, Shyam Lal Sahu from CPIML, A.K. Shekhar Rao, Shiv Kumar Prasad expressed their views on the issue of workers and farmers. Shyam Lal Sahu, general secretary of the Center of Steel Workers Actu, said that the government is giving concrete shape to the conspiracy to enslave workers.

Rules and legislation are being changed to entrust corporate houses to government companies. Similarly, farmers are also being harassed. That is why farmers have opened their front. This is a historical struggle of the farmers as well as a historic occasion. When the Indian working class has to go shoulder to shoulder with farmers in this war.