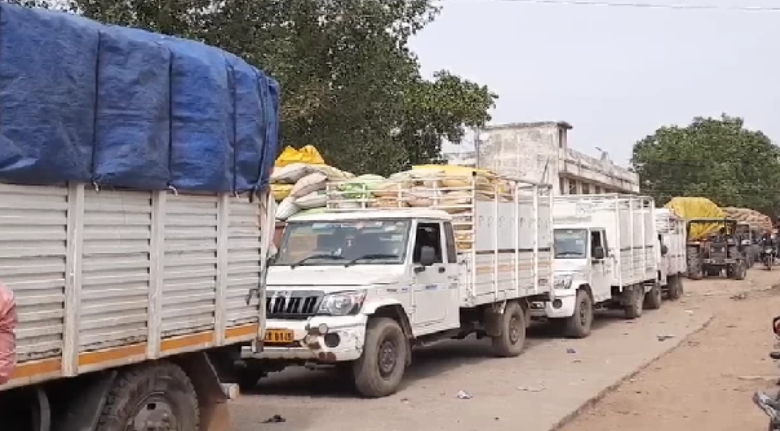 There has been a jam of 3 km in the market due to the workers going on strike in Bhatapara Agricultural Produce Market. Around 400 trains were stuck in the jam. The farmers are getting upset due to the workers going on strike. Farmers are standing in the hot sun since Monday. The procurement in the mandi has been stopped in view of the workers’ strike.
Please tell that in Bhatapara Agricultural Produce Market for 5 days, farmers are standing to sell their produce in the scorching sun. The workers have started a strike with their demands. Due to this, the purchase has been stopped. Farmers’ trains have been jammed for about four kilometers.
Farmers, who came on Monday, have not been able to sell their produce even for the fifth day today. Farmers are waiting for their number to come out. In the same produce market, the Hamal and Reza laborers also shut down and went on strike, due to which the purchase in the mandi was stopped. The laborers demand that even during the lockdown time when the market was closed, the artisans were selling the produce of the farmers directly to the millers.
That too at a quarter of the price, the laborers did not get their wages due to selling the produce outside and outside, and according to the rules, the owners have been given the right to buy and sell paddy in the mandi. Even then, they are working against the rules. Regarding all these things, the laborers have demanded from the market secretary that in the produce sold at the time of the lockdown, the laborers’ wages should be removed and given to them, to ensure that the agents are not given the right to sell the produce from outside and such If done, their license should be revoked.