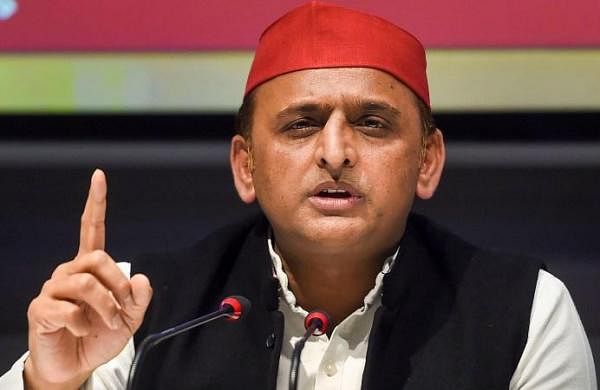 LUCKNOW: A photograph of RSS chief Mohan Bhagwat sitting with Samajwadi Party patriarch Mulayam Singh Yadav has set tongues wagging in poll-bound Uttar Pradesh, with the Congress taunting that the S in SP means the Sangh.

This prompted a sharp response from SP chief Akhilesh Yadav who accused the BJP and the Congress of driving political mileage out of a social event.

In a tweet in Hindi, the UP Congress had said, “Does the ‘S’ in the ‘new SP’ mean ‘Sanghvaad’?” The photograph was taken at the wedding reception for Vice President M Venkaiah Naidu’s granddaughter in Delhi on Monday.

The SP veteran is wearing his party’s red cap.

SP’s rivals are insinuating that Yadav’s alleged hobnobbing with the Sangh Parivar leader might have something to do with the recent Income Tax raids at some close associates of Akhilesh Yadav.

The SP has said the BJP government at the Centre is “misusing” the enforcement agencies to put pressure on the opposition party.

Union minister Arjun Ram Meghwal, who turned 68 on Monday, is also soon in the picture, which he had tweeted.

“Took blessings from the most revered sarsanghchalak of the Rashtriya Swayamsevak Sangh Dr Mohan Bhagwat. Your love, cooperation and guidance always inspire me to serve Mother India by walking on the path of duty,” he wrote in Hindi.

The UP BJP in a tweet in Hindi on Tuesday said, “The picture says a lot.”

In reaction, the SP tweeted in Hindi, “The picture says something, and it unveils a secret that someone had come to tell” the ‘unupyogi’ (useless) one is all set to go, and the cyclists are all set to come in.”

The SP had earlier termed Chief Minister Yogi Adityanath “unupyogi” after Prime Minister Narendra Modi came up with the line “UP plus Yogi bahut hai upyogi”, suggesting that the CM is very useful for the state.

Asked to comment on the photo during the party’s rath yatra in Mainpuri, Akhilesh Yadav said this was not the only picture from the wedding reception.

“A number of senior leaders of the country were present there including Sharad Pawar ji. I also saw another photo in which Supriya Sule (Pawar’s daughter) is meeting Netaji (Mulayam Singh Yadav), and Netaji is blessing her.”

He said it depended on who sees what in the picture, and the BJP and the Congress are the “same”.

“The photo says that their (BJP’s) big leader met Netaji, and he blessed Netaji and said that Baba ji (Adityanath) is going and the Samajwadis are coming,” he told a TV news channel, predicting the outcome of the assembly polls early next year.