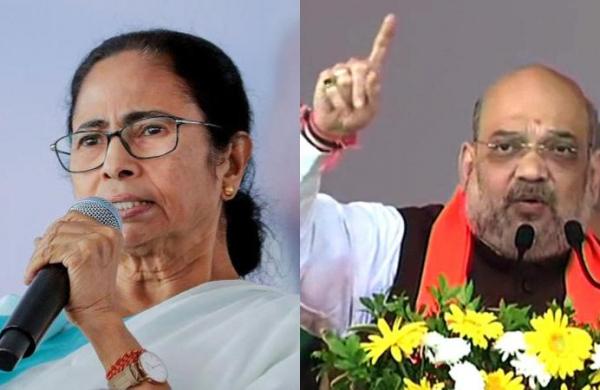 By PTI
KOLKATA: A head-to-head political battle will play out on Thursday in Kolkata’s neighbouring South 24 Parganas district where Home Minister Amit Shah and West Bengal Chief Minister Mamata Banerjee are scheduled to address rallies separated by some distance.

It is for the first time in the run up to the assembly elections that Banerjee and Shah will be holding rallies in the same district and more or less at the same time in the afternoon.

Shah is scheduled to arrive in Bengal tonight on a two-day visit starting from Thursday.

He is scheduled to visit Kakdwip area near Sagar Island in South 24 Parganas district, where he will flag off the final leg of the five phases Parivartan Yatra of the BJP in the state.

“He will arrive in Kolkata tonight. On Thursday he will visit Kapil Muni Ashram.From there he will go to Namkhana where he will address Poribartan Yatra,” a senior state BJP leader said Wednesday.

Shah is also scheduled to have lunch at the residence of a migrant labourer and later take part in a roadshow, he said.

Meanwhile, Banerjee and her nephew Abhishek Banerjee, who is also the local party MP, is slated to address a party workers meeting at Pailan in South 24 Parganas on Thursday.

“It will be a politically important day tomorrow.

Both Shah and Didi will address rallies in the same district,” a senior South 24 Parganas TMC leader said.

After having a limited presence in politically polarised Bengal for decades, BJP has emerged as the main rival of the ruling Trinamool Congress after winning 18 of the 42 Lok Sabha seats in the state in 2019 general elections, only four less than the TMC tally of 22.

With the BJP’s strength increasing in the state in the last few years, its leaders are upbeat that the party will be able to end Chief Minister Mamata Banerjee’s 10-year rule in the state polls.

Election to the 294-member state Assembly is expected in April-May this year.