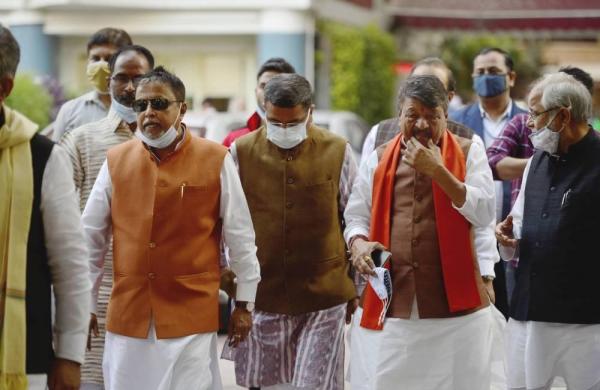 By Express News Service
NEW DELHI: The BJP on Thursday approached the Election Commission against municipal administrators in West Bengal, alleging that they continue to function in their roles even after the end of their five-year tenure.

The party also claimed that the Trinamool Congress-led state government has not held municipal elections fearing loss of face in the run-up to the Assembly polls.

In a memorandum to the EC, BJP stated that 125 of the 135 municipal bodies in the state completed their tenures in April-May last year. But no polls have been held yet.

“Apprehending failure in the municipal elections which could have ramifications in the Assembly, TMC influenced the state election commission and got municipal polls postponed,” alleged the memorandum submitted by a BJP delegation consisting of the party’s national general secretary Bhupender Yadav, Union Minister Dharmendra Pradhan and others.

The TMC, on the other hand, have demanded the removal of deputy election commissioner Sudip Jain, who is in-charge of the state. They accused him of being biased against them.

TMC spokesperson Sougata Roy said party leader Derek O’ Brien has written to the Election Commission demanding that Jain be removed as he was biased against them t during 2019 Lok Sabha polls.

“During Parliamentary polls, Sudeep Jain had taken several steps which were not only against the norms of the Election Commission but also against those of the federal structure. We don’t have any faith in him. We (TMC) apprehend that this time, too, he will take steps which will either directly or indirectly help the BJP,” Roy said at a press conference.