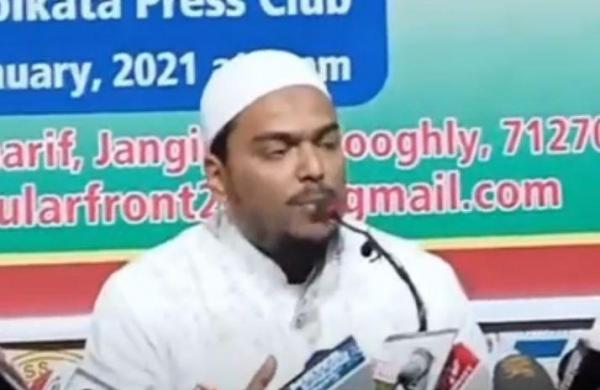 The new outfit has already been given 38 seats to contest in the upcoming Assembly elections.

Abbas, a pirjada (cleric) of Hooghly’s Furfura Sharif Darbar, has a strong command in many parts of south Bengal. The ISF’s alliance with the Left Front (LF) and Congress is likely to throw a challenge to the TMC’s dominance in minority-dominated regions of the state where the ruling party has a strong support base since 2011.

“So far, we have been given 38 seats where the ISF will field candidates. The LF has given us 30 seats and the Congress agreed to allow us in 8 seats. We have demanded four more sears from the Congress and dialogue is on to seal the seat adjustment,” said Nausad Siddiqui, the president of the ISF.

The 38 seats are yet to be identified.

The seat adjustment process had received a jolt as the Congress was reluctant to allow the ISF to contest in Malda and Murshidabad districts which is known as the strongholds of the grand old party. In the Sunday’s Brigade Parade Ground rally of the alliance, Abbas had clearly said he would not join hands with the Congress if his demands were not met.

With the intervention of LF chairman Biman Bose, the issue was sorted out on Monday night and Abbas withdrew his statement.

The clerics of Furfura Sharif Darbar located in Hooghly district wield strong influence over minority voters in south Bengal. The impact of the cleric’s influence was visible in the 2011 Assembly elections after the minority community’s preferences shifted from the LF to the TMC.

The Furfura Sharif Darbar is visited by thousands of Bengali Muslims on religious occasions. The authorities of the shrine carry out charity work for underprivileged people of the minority community in south Bengal.

Abbas launched the ISF on January 21 claiming his outfit would raise the voice and demands of the people belonging to the backward sections of the society. But in reality, the ISF is focused to gain grounds in minority-dominated pockets using the upcoming Assembly elections as its founder Abbas had clearly said his party would consolidate Muslim electorates and in the future, it would be the kingmaker of Bengal.

“Inclusion of the ISF in the alliance might prove significant in the upcoming polls. The ruling TMC is ahead of only 3% vote-share after the BJP bagged more than 40% votes in the 2019 Lok Sabha elections. In all previous elections since 2011, Mamata Banerjee’s party enjoyed minority’s support en bloc. If the ISF can bring 1 to 2% of minority electorates in its fold, the TMC will be in trouble,” said a CPI(M) leader.