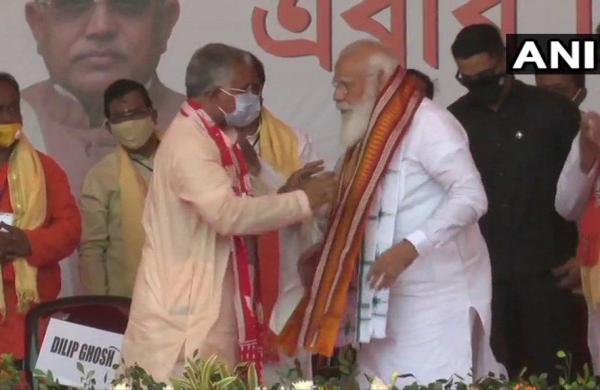 Express News Service
KOLKATA: Referring to TMC’s election manifesto, Prime Minister Narendra Modi on Saturday attacked Bengal CM Mamata Banerjee alleging that she released the list of promises after looting the state for the past 10 years.

The PM also accused the TMC supremo of snatching away 10 years from the lives of Bengal’s youths.

Addressing a rally in Kharagpur, the erstwhile constituency of the BJP’s state president Dilip Ghosh where the party pitted Bengali actor Hiranmoy Chatterjee, Modi said, “Now you are making 10 promises in your party manifesto. People of Bengal trusted you and gave you 10 years but you turned to be a traitor.”

ALSO READ | The game is over: PM Modi, BJP lash out at Mamata Banerjee in Bengal

Modi took a jibe at Mamata over the ‘nephew’ issue. “India is moving towards a single-window system to encourage ease of doing business. In Bengal, there is only one single window which is bhaipo (nephew) window,” he said.

The PM also slammed Mamata for her opposition to the Centre’s educational policy. “The new education policy allows youths to pursue higher education in regional languages. Didi has emerged as a wall between the young students and their dream. The TMC is running extortion rackets, mafia raj, syndicate culture and playing game of appeasement politics. If anyone protests in Bengal, Didi puts him in jail. After wresting power in Bengal, BJP-led government will establish rule of law in the state.”

While urging the electorates to cast their votes without fear, Modi asked the police and administrative officials to follow the Constitution.

Retaliating Modi’s attack, Mamata Banerjee, who addressed rallies in neighbouring East Midnapore district, branded the BJP as a party of “biggest extortionists”. “Modi ruined the country’s economy. It has sold railways, BSNL, insurance agencies. It is the worst political party. In BJP-ruled states, Dalit women are set ablaze. Even in the party, women workers are not safe. It is a party of extortionists,” she said.