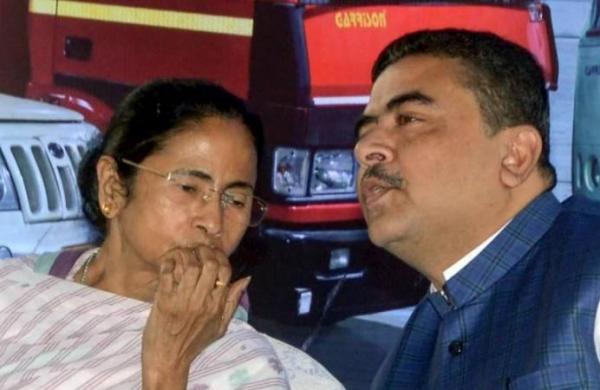 By Express News Service
KOLKATA/NEW DELHI:  With the BJP unveiling its first list of 57 candidates for the eight phase West Bengal Assembly elections on Saturday, the Nandigram constituency is set for a battle of titans after the saffron outfit pitched former state minister Suvendu Adhikari against chief minister Mamata Banerjee. Both the BJP and the ruling Trinamool Congress have fielded heavyweights, hoping to pin down each other in the constituency.

BJP national general secretary Arun Singh announced the names of the candidates on Saturday at the party headquarters in Delhi even while the full might of the outfit was busy preparing for Prime Minister Narendra Modi’s Brigade Ground election rally on Sunday. The BJP also sought to create another buzz by fielding former IPS officer Bharati Ghosh against another former senior police official, Humayun Kabir, from the Debra Assembly seat.

Ghosh had contested the 2019 Lok Sabha polls but lost. Kabir joined the TMC last month.  In line with the open arms welcome to sitting legislators from other parties, the BJP fielded former CPM leader Tapashi Mondal from Haldia and Sudip Mukherjee, ex-TMC, from Purulia. The two had won from the same seats in 2016. The BJP also fielded former Indian cricket player Ashok Dinda from East Midnapore. Singh said the first list of the candidates have 19 Dalits and seven tribals.

While the chief minister is banking on her political war cry of “Ma, Mati, Manush,” the BJP is seeking to set the electoral narrative with Adhikari against her. The BJP is hoping that the politically influential Adhikaris  can upset the CM. “Since his joining the BJP, Adhikari has been saying that he will defeat the chief minister by over 50,000 votes. The party has given him the opportunity to fulfill his goal,” said a senior BJP leader.

Mamata’s decision to not contest from Bhawanipur  and selecting Nandigram instead was said to be her master-stroke to blunt Adhikari’s attempt to harm the party in other parts of south Bengal.  “Her goal was to confine Adhikari in a small pocket. The CM’s victory is sure. But her move forcing the BJP to field Adhikari against her will keep the BJP’s key player confined to Nandigram,” said a TMC leader.

I am Bhumiputra, Didi is an outsider: SuvenduPitted against his former boss, BJP’s Suvendu Adhikari yet again exuded confidence about trouncing Trinamool supremo Mamata Banerjee. “I am Nandigram’s ‘Bhumiputra’…Mamata is an outsider here (in the region),” he said after his candidature was announced.