Bengal polls: Days after ‘attack’, Mamata to conduct roadshow on wheelchair in Kolkata on Sunday 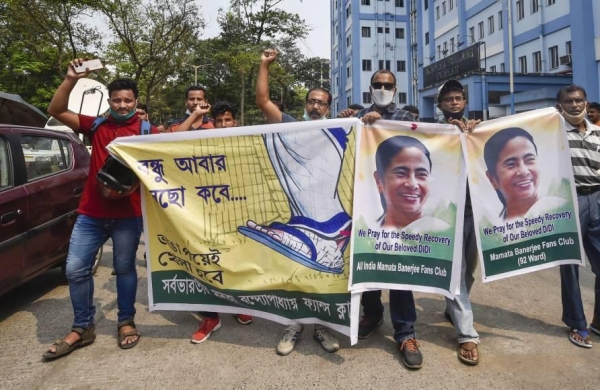 She will address a public rally at Hazra this afternoon.

It will be her first public appearance after she was allegedly attacked by some people in Nandigram earlier this week.

On March 10, the Chief Minister, who was on a two-day visit to Nandigram from where she filed her nomination, alleged that she was pushed by a few unidentified people during her election campaigning.

Later, she was brought to Kolkata’s SSKM Hospital by road from Nandigram.

“Chief Minister Mamata Banerjee has responded well to the treatment. The six-member board has re-examined her health condition. We have opened the plaster cast. Fresh plaster has been applied. She has been discharged with appropriate instructions, after her repeated requests. She has been advised to revisit after seven days,” the medical board of the SSKM Hospital in Kolkata told reporters.

ALSO READ | BJP firms up candidates, set to come out with all guns blazing in poll-bound states

On Friday, a delegation of six MPs of Trinamool Congress (TMC) met the Election Commission officials in the national capital to raise their concern over the Nandigram incident. “The events/actions leading up to the attempt on her life, leave no doubt that the attack was premeditated and part of a deep-rooted conspiracy,” read a letter by the TMC to the Election Commission.

A BJP delegation also met the Election Commission of India and demanded an impartial probe into an alleged attack on Mamata Banerjee.

“This is ‘siyasi pakhand’ (hypocrisy) to gain sympathy. Before polls, she (Mamata Banerjee) planned this ‘nautanki’ after sensing difficulties in Nandigram,” Chowdhury had said.

BJP National General Secretary Kailash Vijayvargiya too on Saturday said that the attempt by Trinamool Congress to create controversy has backfired as the district administration as well as Election Commission has called the incident in Nandigram that resulted in an injury to Banerjee as an accident.

“Reports of district administration and EC have called it an accident. Mamata ji has said that she was pushed. It’s a controversy between governance and administration. This attempt of stirring controversy and gain sympathy has backfired,” said Vijayvargiya after BJP’s central election committee meeting in Delhi.

“We are not worried. Those (TMC) who tried to use the wrong means to gain sympathy from people should be worried. They have been exposed,” he added when asked if Banerjee’s injury could swing voters in her favour.