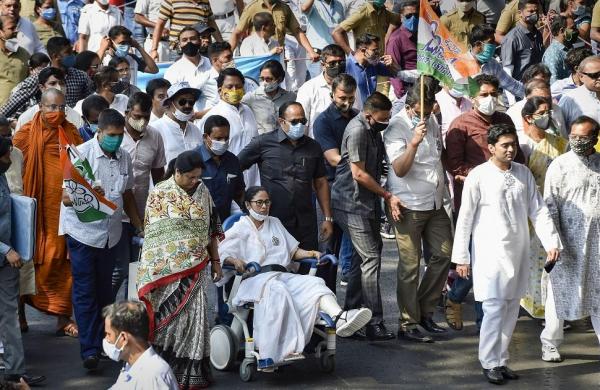 By PTI
JHALDA: West Bengal Chief Minister and TMC supremo Mamata Banerjee on Monday said no conspiracy can stop her from campaigning ahead of the assembly polls in the state and will continue to fight against the BJP.

Addressing her first rally in a district after being injured at the hustings in Nandigram, Banerjee said as long as she has her voice and her heart functions, she will continue to fight.

“Wait for a few days, my legs will be better. I will see whether your legs move freely on Bengal’s soil,” Banerjee said without naming anyone.

“Only conspiracy,” she said, addressing the election rally here in Purulia district.

She also said the BJP has come from Delhi with many of its leaders to win the assembly elections.

“But I say you will not get Bengal,” she said, claiming that her government has done a lot of development and welfare works in the state in its 10-year rule.

“No other government in the world has been able to do as much work as ours. Their (BJP) prime minister cannot run the country, totally incompetent,” she said.

The Trinamool supremo said that her government will deliver free ration to the people of West Bengal at their doorsteps if voted to power.

“TMC government will remain in power, you will continue to get free ration. We will deliver ration to your doorstep. You don’t have to come to the shop after May,” said Banerjee.

“My government has taken the decision in the budget to give Rs 1,000 to all the widows,” she said adding that a pension of Rs 2,000 was also provided in the Budget for tribals aged above 60 years.

“This is the only state that has not snatched the land rights of tribals,” Banerjee said.

Banerjee was injured in her left leg, head and chest while campaigning in Nandigram on March 10 after filing her nomination from the high-profile seat, an incident the ruling TMC claimed was a “BJP conspiracy to take her life”.

The Election Commission, however, ruled out that there was an attack on the chief minister after reviewing the reports sent by its two special poll observers and the state government.

The poll panel concluded that Banerjee sustained injuries due to a lapse on part of her security in charge.