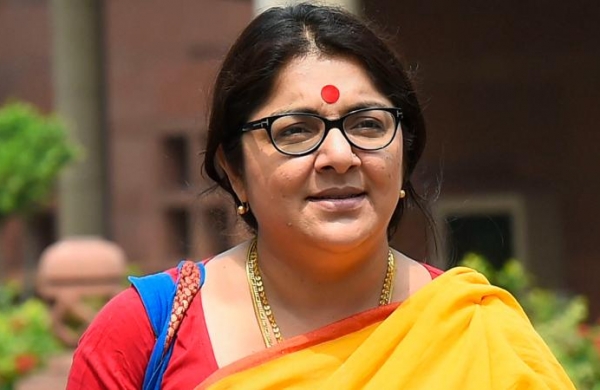 By ANI
HOOGHLY: Amidst the ongoing polling for the fourth phase of the West Bengal Assembly elections on Saturday, Bharatiya Janata Party (BJP) MP Locket Chatterjee was allegedly attacked in Hooghly’s Chunchura.

Chatterjee spoke to an Election Commission official saying that she was attacked by locals at polling booth no 66 in Chunchura. She also said that journalists were attacked too. The BJP leader demanded additional forces to be sent in Chunchura.

Voting for 44 constituencies in West Bengal’s fourth phase Assembly elections began at 7 am on Saturday amid tight security.

#WATCH West Bengal: BJP leader Locket Chatterjee speaks to an Election Commission official over phone, says that she was attacked by locals at polling booth no.66 in Hooghly. She also says that journalists have been attacked too and demands that additional forces be sent here. pic.twitter.com/rrgGpFxfHT
— ANI (@ANI) April 10, 2021

This phase of the elections will witness an intense battle between 373 candidates in 44 constituencies of the state across five districts – Cooch Behar, Alipurduar, South 24 Parganas, Howrah and Hooghly.

Among the 44 constituencies, nine are in Howrah, 10 in Hooghly, 11 in South 24 Parganas, five in Alipurduar and nine in Cooch Behar.

A total of 1,15,81,022 voters will participate in this phase, out of which 2,63,016 are first-time voters. The smallest constituency is Bally with 1,76,001 electorates whereas Chunchura is the biggest constituency with 3,13,701 electorates. The fifth phase of the Assembly elections will commence on April 17. Counting of votes will take place on May 2.