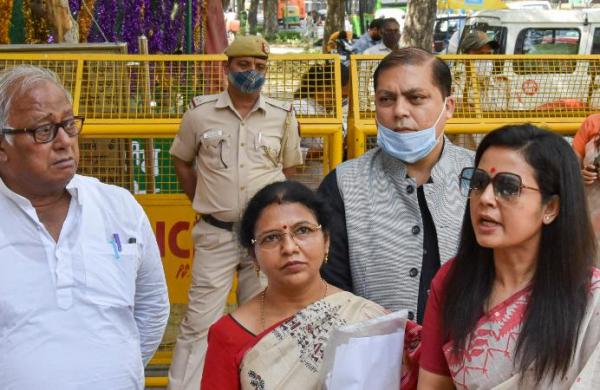 By PTI
NEW DELHI: Alleging that fair elections in West Bengal are becoming a ‘distant reality’, a delegation of TMC MPs met the Election Commission on Friday to register their protest against the poll panel’s reported decision to not permit state police personnel within 100 metres of polling stations.

“It is becoming increasingly clear that free, fair and transparent elections in State of West Bengal is becoming a distant reality.”

“This is evident from the partisan and biased approach taken by the Election Commission of India (ECI) in respect of the ongoing elections in the State,” a memorandum submitted to the apex poll panel said.

“On the first count, it has been reported in media that the ECI has decided to not permit presence of State police within 100 m of polling stations and only deploy Central Forces in such arena. If true, this decision is unprecedented and casts severe aspersions on the reputation of the police administration in the State of West Bengal,” it added.

The memorandum said this needs to be substantiated at the appropriate level.

Stating that the ECI’s decision is only for West Bengal and not the other four poll-bound states in the country, the Trinamool Congress said the deployment of central forces should be to help the state government deal with law and order and “not deliberately demonise the state police personnel that have worked under different governments”.

“Propriety demands that there should be proper coordination between the State and Central forces to ensure free and fair elections and that combined groups of both State and Central Police forces be deployed within 100 m of the polling booths,” the letter by the party said.

Despite several requests, it said, the apex poll panel had “summarily dismissed the demand for tallying of all VVPAT machines, allegedly on account of the decision of the Supreme Court of India passed in March 2019”.

According to the party, its detailed submissions on the matter had clearly not been factored in.

“We urge you to withdraw your decision to deploy only central forces within 100 m of the polling stations. Further, we reiterate our demand to tally 100% VVPAT machines with EVMs after polling is over, to reassure the voters that his/her choice has indeed been recorded, both electronically and physically,” it said.