Bengal LoP, suspended from assembly, protests after being prevented from entering chamber 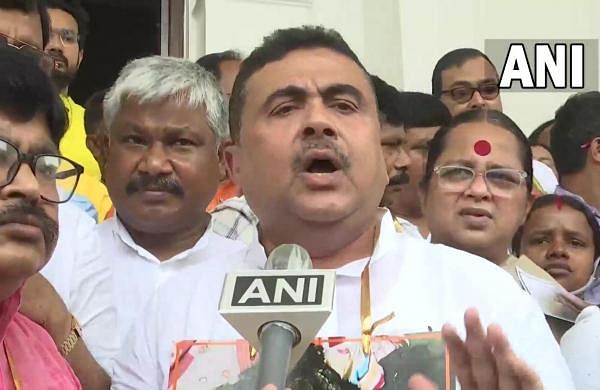 KOLKATA: Leader of Opposition Suvendu Adhikari, who has been suspended from the West Bengal Assembly for the entire session till the House is prorogued, on Monday staged a sit-in protest on the premises after he was prevented from entering his chamber.

Adhikari, along with four other BJP MLAs, was suspended by the speaker from the assembly after legislators from the saffron party and the TMC came to blows inside the House on the last day of the budget session in March over the Birbhum killings.

Prorogation is discontinuing a session of Parliament or a Legislative Assembly without dissolving it. When Adhikari, the Nandigram MLA, came to the assembly, he was prevented from entering his chamber citing the suspension notice.

Infuriated, he and some other BJP legislators sat on a demonstration near the statue of B R Ambedkar on the premises. “This is autocratic. For the first time, an LoP has been stopped from entering his chamber in the assembly. The entire country knows how I was suspended in an undemocratic manner. As I am not allowed to enter my chamber, I would carry out my official work from this spot every day. This will be my office till I get to enter my chamber,” he told reporters.

Speaker Biman Banerjee could not be contacted for a comment.

Senior TMC leader and party chief whip in the assembly, Nirmal Ghosh, said Adhikari should stop creating a scene as he is well aware that a suspended member is not allowed to enter the assembly premises.

“Any member who has been suspended is generally not allowed to enter the assembly premises. He (Adhikari) is very well aware of it. He is just doing drama to get some mileage in the media,” he said.

Adhikari, along with BJP legislators Dipak Burman, Shankar Ghosh, Manoj Tigga and Narahari Mahato, was on March 28 suspended for the entire session till the House is prorogued.

The House had plunged into chaos on that day as MLAs of both sides engaged in fisticuffs, leading to the hospitalisation of some of the legislators.

The incident happened after BJP MLAs trooped to the well, demanding a statement by Chief Minister Mamata Banerjee over the “worsening” law and order situation in the wake of Birbhum killings, in which nine people (eight at that time) died of burn injuries after assailants threw petrol bombs at several houses in Bogtui village near Rampurhat on March 21 following the murder of local TMC leader Bhadu Sheikh.

Even as the speaker tried to pacify the BJP MLAs, who continued sloganeering, a war of words broke out with legislators of the treasury bench which eventually led to the ugly scuffle.

The incident brought back memories of opposition Left and ruling TMC legislators trading blows in December 2012 on the floor of the House, leading to injuries on both sides.