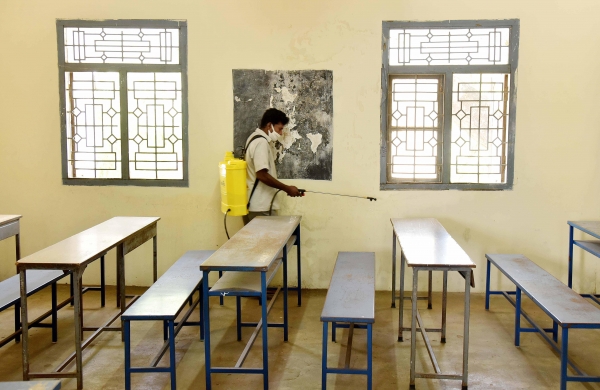 By PTI
KOLKATA: The West Bengal government has no plans to open schools at any level in the near future as there is the threat of a third wave of the Covid-19 pandemic, a senior official said on Tuesday.

Whenever school campuses reopen, students of higher classes will be the first to start offline classes and not those at the primary level, the educational department official said.

However, the final decision on these issues will be made at the top level of the government, he said.

He was responding to queries on ICMR Director General Balram Bhargavas statement in Delhi that it will be wise to reopen schools in the country with the primary section as children can handle viral infection much better than adults.

Bhargava, however, stressed that for such a step to be considered, it must be ensured that school teachers and other support staff members are vaccinated.

Going by the recommendations of the health experts in the state, the possibility of a third wave attack which may affect children more and the high rate of coronavirus infection even two months back, the school education department “is in no undue haste” to open primary, secondary and higher secondary schools now or in immediate future, he said.

“We had sought to start on-campus classes at secondary and higher secondary levels in February before the second wave. But the virulence of pandemic changed the situation and campus activities had to be entirely stopped,” the official said.

Public health expert Dr Joydeb Roy said that it would not be wise to start on-campus primary classes without waiting for some more time as the threat of the third wave of the pandemic is looming large possibly.

“Vaccinating all the staff including teachers should be the pre-condition for opening the campus. Resumption of classroom teaching should not be made at the current situation and it should start with higher classes,” Roy said.

Preparing the groundwork for reopening schools, which includes vaccination, should be undertaken in the meantime, the eminent doctor said.

Bhargava said earlier in the day that once India starts reopening schools, it will be wise to begin with the primary section as children have a lower number of ace receptors to which virus attaches, making them much better at handling viral infections than adults.

The Indian Council of Medical Research’s (ICMR) latest national serosurvey has found that the seroprevalence among those aged six to nine was 57.2 per cent which is very similar to adults, he said.

The state’s Covid-19 fatalities increased to 18,021 on Tuesday after 10 people succumbed to the disease, the health department said in a bulletin.

Kolkata, which did not register any death due to coronavirus on Monday, recorded one on Tuesday.

In the last 24 hours, 992 recoveries were registered in West Bengal which improved the discharge rate to 97.99 per cent.

The number of active cases currently is 12,509, the bulletin said.

Meanwhile, 2,48,888 people were inoculated against coronavirus in the state on Tuesday, a health department official said.