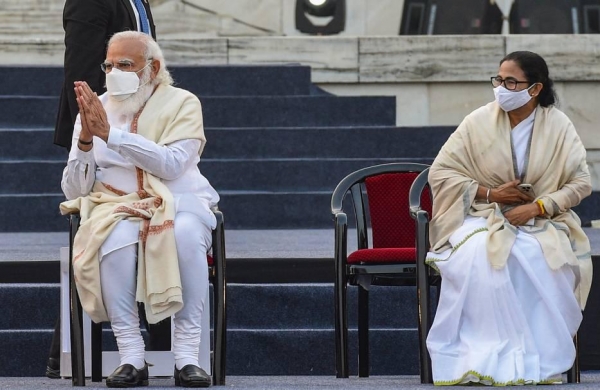 The selection for the public rally at the Dunlop factory ground in Sahaganj by the Trinamool Congress is said to be a reflection of an intensified slugfest between the ruling party and the BJP in the state.

The BJP strategically picked the Dunlop factory ground, known as an industrial zone, as the prime minister is likely to address the rally Bengal’s poor performance in attracting investments during Banerjee’s rule. Modi’s last public rally was in East Midnapore district which is known as an agricultural region.

“The decision of holding the rally at the same venue is part of our aggressive campaign strategy against the BJP. We have decided to address rallies from the same place where the BJP will try to mislead the people with a bunch of lies. It will strengthen our counter-attack to the BJP,’’ said TMC MP and spokesperson Saugata Roy.

Two days after BJP’s state and national functionaries visited the ground, TMC leaders also went there.It will be the first time the Bengal CM will address a poll rally from a place where Modi will be present.

Sources in the BJP said Modi is likely to unleash an attack on Banerjee for driving out Tata Motors from Singur in Hooghly district and the subsequent impact on Bengal’s investments.

Senior BJP leaders, including national vice-president Mukul Roy, have already announced that the party will bring back Tata Motors to Singur if it comes to power.

“Standing on the same ground, the CM will reply to the allegations that Modi is likely to make in his speech. We will follow the practice of selecting the same venues for organising rallies ahead of the Assembly elections,’’ said a senior TMC leader.

A designated MP/MLA court in   West Bengal issued summons to Home Minister Amit Shah on Friday to appear either personally or through a lawyer before it on February 22 in connection with a defamation case lodged against him by Trinamool Congress MP Abhishek Banerjee. The special judge of MP/MLA court at Bidhannagar directed that Shah is “required to appear in person/by pleader” at 10 am on that day.

The Centre has ordered deployment of around 12,000 troops  of Central Armed Police Forces (CAPF) in West Bengal ahead of the state elections and Prime Minister Narendra Modi’s visit, according to government sources. As many as 115 companies of paramilitary forces are being sent to West Bengal in view of the multi-phase election, a senior government functionary said, adding that the forces will join duties from February 21.

BJP’s youth-wing leader Pamela Goswami was arrested with cocaine from south Kolkata’s upscale New Alipore area on Friday. Goswami, the state secretary of Bharatiya Janata Yuva Morcha, was along with a friend, identified as Prabir Kumar Dey, in her car when they were nabbed. Around 100 gm of cocaine was allegedly found in her handbag, and other parts of the car.