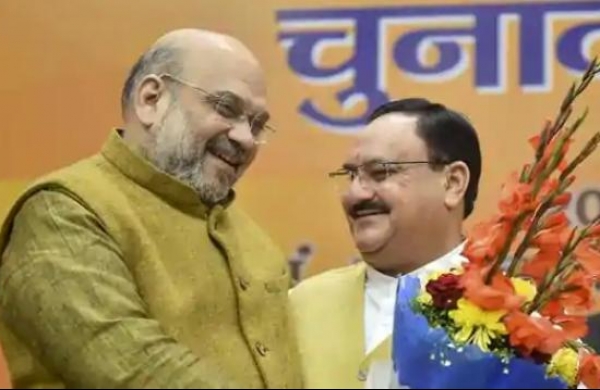 Express News Service
NEW DELHI:  Union Minister for Home Affairs Amit Shah and BJP chief JP Nadda will carry out a joint campaign of the saffron outfit in West Bengal before the Assembly elections. The two will lead five ‘rath yatras’ across the state to boost the party’s chances in a desperate battle against Mamata Banerjee’s TMC.Still to project a face for the chief minister’s position, the two heavyweights will also welcome those jumping ship from TMC.

Since the BJP has not said yet who would be the party’s choice for the top spot in the state cabinet if they form the government, observers feel they will build the campaign in such a way that the focus stays on the star campaigners for the moment.

While Shah is likely to lead three rath yatras, Nadda will head two, sources said. They added that route details are being chalked out and the first of the yatras will be flagged off in a few days.

Like in the Bihar assembly elections, Prime Minister Narendra Modi is likely to join the campaigning in the last leg in the role of a finisher to help the party consolidate its support base and woo the fence-sitters.Shah, a former BJP chief himself, had missed much of the campaigning in Bihar. But he will be fully in action in West Bengal, with party leaders stressing that the political turf over there suits him better, like in Uttar Pradesh.

While the West Bengal unit of the BJP is led by Dilip Ghosh, the party appears not too keen on having him as a leading campaigner due to his limited mass appeal. The BJP will be banking on sub-regional satraps such as Suvendhu Adhikari to help Shah-Nadda attract crowds and send out a message to the voters that the saffron outfit can dislodge Mamata’s government.

Ruled by the Left for over 30 years and for a decade by TMC, West Bengal is headed for a battle between BJP and TMC this time. The last few weeks have seen important members of the TMC switching over to BJP and party leaders are confident that this number will increase in the coming days.