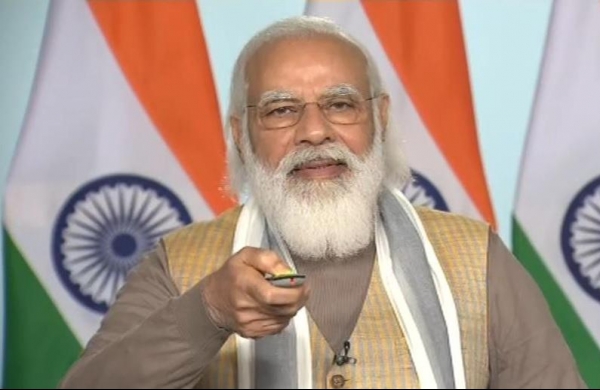 By PTI
BHADARWAH: Bed-ridden for the last 15 years, a 65-year-old man from Bhadarwah in Jammu and Kashmir’s Doda district was among three residents of the Union Territory who recently received the ‘best construction award’ under the Pradhan Mantri Awas Yojana (PMAY).

Abdul Latief Ganai expressed his gratitude to Prime Minister Narendra Modi and said “the scheme came as a blessing in disguise for his family”.

The awardee was joined by Doda Deputy Commissioner Sagar Dattaray Doifode, Bhadarwah Municipal Committee Executive Officer Yusaf-Ul-Umar and other officials at the mini secretariat in Doda.

During the video conference, Modi talked about the scheme that started in June 2015 and the number of beneficiaries from poor and middle-class families.

Out of total 88 beneficiaries selected for the best construction award from the country, three belonged to Jammu and Kashmir — one each from Samba, Ramgarh and Bhadarwah.

“Due to my prolonged illness, I had to sell everything I had and lived in one room with my wife and two sons but the scheme came as a big relief to my family,” Ganai said.

Hailing from Ward 10 of Tharra Mohalla locality of Bhadarwah town, Ganai used to work at a small cloth shop but a severe slip disc left him bed ridden for 15 years and bankrupt.

“The scheme came as a blessing in disguise for my family as today we are living in our own pucca house and also have been awarded for the best construction by the prime minister himself,” the villager said.

His 24-year-old son Nadeem Latief, who recently completed his post graduation in history, also joined his father at Doda during the video conference and felt elated while his father’s name was being announced for the best construction award.

“We have seen very difficult times as for years me and my brother used to spend nights with our cousins or at a friend’s place as we have only one room, but now we have our own roof for which we are thankful to the prime minister,” Nadeem said.

The executive officer of Bhadarwah municipal committee appreciated the efforts of the Ganai family and said they constructed the house as per guidelines and “now they have been awarded for their honesty and dedication which is a matter of pride for us as well”.

“I hope all the beneficiaries will get inspiration from Ganai as in Bhadarwah town a total of 330 homes have been sanctioned under PMAY Urban, out of which 200 are under construction and 47 have been already completed,” Yusaf-Ul-Umar said.

Under the Economically weaker Sections (EWS) scheme, each beneficiary is given Rs 1.66 lakh to build his or her house.