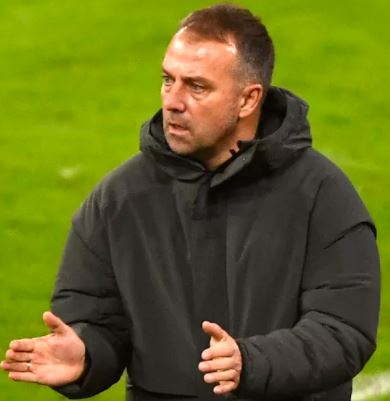 Hansi Flick was rather direct in explaining his game plan in Bayern Munich’s 2-1 win over Wolfsburg.

Surprising everyone with a lineup that featured three wingers, four center-backs, no right-backs, and no true defensive midfielders, Flick spoke candidly to the media after the game about his strategy and what the thought process was behind his unorthodox plan:

A formation previously unheard of at Bayern, this particular approach involved a lot of bold moves — putting Niklas Sule as a right back/center back hybrid, Thomas Muller as a box-to-box midfielder, and almost playing Leroy Sane as a right-back. The scary thing? Almost all of those choices were spot on.

Sule proved himself to be more than capable of being a right back with his sheer size and pace. Muller gave his teammates some slick passes while also chipping in with defensive work as well, recording the second most tackles (3) in the team. Yes, Sane was pretty horrible, but they can’t all be golazos, right?

This approach isn’t too unlike how Julian Nagelsmann took apart Diego Simeone’s Atletico Madrid in last season’s Champions League. Nagelsmann utilized a hybrid of a 3-1-4-2 and a 4-2-3-1, positioning his wing-backs/full-backs asymmetrically to counter Atletico’s strengths on the flanks, while also maintaining defensive stability. In Bayern’s case, they switched between a 4-1-4-1/4-2-3-1 and a 3-4-3, depending on how they were attacking and defending.