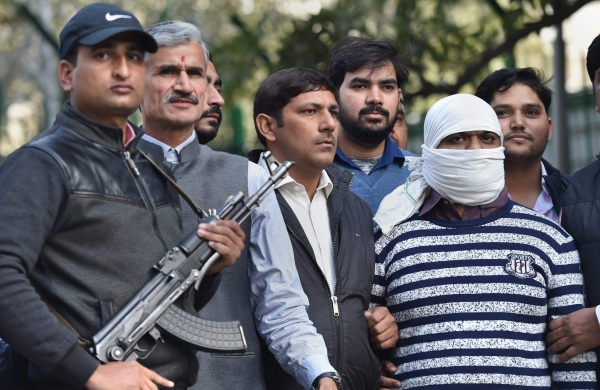 By PTI
NEW DELHI: On September 19, 2008, a week after serial blasts tore through the capital, police stormed into a house in Batla House locality searching for terrorists.

What followed has been written into contemporary history as the Batla House encounter’ that polarised the city, caused a media frenzy and was even cinematically recreated in Bollywood.

The court said Rs 10 lakh should be immediately released to Sharma’s family members.

Khan, who was arrested on February 14, 2018 after being on the run for a decade, was held guilty last week for the murder of Sharma, a celebrated officer of Delhi Police’s Special Cell, and other offences in connection with the encounter.

The case stirred a political storm, led to rights activists questioning the actions of Special Cell officers, divided public opinion and continues to be a raging controversy.

Over the years, the BJP and the Congress have sparred over it with the saffron party accusing the Congress of going soft on terrorism when in power.

The BJP has lashed out at Opposition parties, including the Congress and the Trinamool Congress, for raising doubts about the encounter and asked them to apologise for it.

Karnal Singh, then chief of the Special Cell, recapped many details of the police operation that fateful day at house number L-18 in the Batla House locality of Jamia Nagar in south Delhi in his book Batla House: An Encounter that Shook the Nation.ALSO READ | Ravi Shankar Prasad slams Congress, says Batla House incident designed to weaken morale of Delhi Police

Fake news and “street rumours” were picked up by a section of politicians, activists and media to paint the 2008 Batla House encounter of IM terrorists as staged, he had said last year while talking about his book.

Six days earlier, on September 13, 2008, a series of five blasts in the national capital killed at least 30 people and left over 100 injured.

Karnal Singh spearheaded a probe into the blasts as the head or joint commissioner of police of the elite Special Cell that was raised specifically to undertake counterterrorist operations.

The gunfight that broke out is viewed by many to be among the most politicised police encounters in the country.

According to political observers, elections in Delhi till then were about development issues to woo voters but the Batla House encounter changed that.

The politics of polarisation became part of the political landscape of the national capital after that.

Political commentator and senior journalist Rasheed Kidwai said the undercurrents of polarising politics in the capital, which has been like a melting pot of the country, became very pronounced after the Batla House encounter.

The incident gained traction in political discourse because it was a matter involving national security and politicians used polarising language which made matters worse, Kidwai said.

The encounter also formed the basis of an action thriller film by the same name directed by Nikkhil Advani and starring John Abraham and Mrunal Thakur.

After the encounter of September 19, 2008, protest rallies were organised against it by teachers and students of Jamia Millia Islamia University.

The National Human Rights Commission(NHRC), which had conducted an inquiry in the case on the direction of the Delhi High Court, gave a clean chit to Delhi Police.

Two other suspects, Mohammad Saif and Zeeshan, were arrested earlier.

The court had said on March 8 that it was “duly proved that Ariz Khan and his associates caused murder of police official and fired gunshot on the police official”.

The trial court had sentenced Indian Mujahideen terrorist Shahzad Ahmed in July 2013 to life imprisonment in connection with the case.

His appeal against the verdict has been pending in the high court.

Ahmed, who was arrested from Lucknow in 2010, had been declared a proclaimed offender along with Khan.