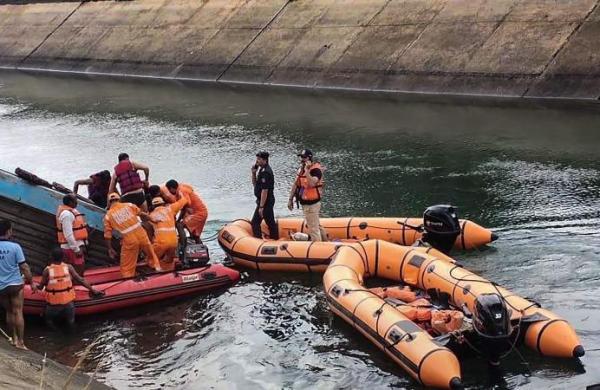 Express News Service
BHOPAL: Residents of Madhya Pradesh’s Sidhi district woke up to a shocker on Basant Panchami morning on Tuesday as an overcrowded bus with over 50 passengers on board plunged into a canal.

Forty-four bodies were retrieved till 6 pm. While six passengers were rescued. one swam to safety. A woman, who was rescued alive, succumbed at the hospital in Sidhi’s Rampur Naikin area later, taking the toll till 6 pm to 47, the IG-Rewa Zone Umesh Joga said.

The incident happened at around 8 am when the private bus (which had a 32 seat capacity) boarding over 50 persons. The bus, which started from Sidhi district was heading to Satna district when it plunged into a deep canal near Patna village.

An NDRF team from Varanasi (which was camping in Sidhi district) and SDRF teams, besides Home Guards and divers from Sidhi and adjoining districts, retrieved 37 bodies from the bus and six more bodies from the canal, which carries water from the Bansagar Dam (built on Son river in Shahdol district) to parts of adjoining UP and Bihar. Search operations were underway till evening.

Over 40 dead in a major accident in Madhya Pradesh’s Sidhi after a bus carrying 50 passengers plunged into a canal. @anuraag_niebpl pic.twitter.com/NELxUBhKQs
— The New Indian Express (@NewIndianXpress) February 16, 2021

With the water level being high and the current too strong, the rescue operations gained momentum only around 9.30 am, after the release of water into the canal was stopped on CM Shivraj Singh Chouhan’s orders.

The deceased included 24 men, 20 women, and a four-year-old boy — mostly hailing from the Sidhi district. Twentyone of them have so far been identified. Most of the passengers, including at least 16 young girls and women, were on their way to Satna district to appear in the auxiliary nurse midwife (ANM) recruitment test, while some of the young men were on their way to watch a cricket match.

The deceased also allegedly included the bus conductor, who is reportedly the nephew of the bus owner Kamlesh Singh, a resident of Sidhi. The bus driver, however, jumped out of the bus to safety when the vehicle plunged into the canal. He is absconding.

The tragedy prompted CM Chouhan to postpone all official events slated on the occasion of Basant Panchami, including the grand event pertaining to Grih Pravesham (house warming) of houses built for around 1.10 lakh beneficiaries under the PM Housing Scheme across MP. The event was to be graced by Union Home Minister Amit Shah through video conferencing.

“We also postponed Tuesday’s state cabinet meeting slated at 12.30 pm. Later, we held the meeting in the evening as it was necessary for finalising next week’s annual state budget as well as taking stock of the situation at the accident spot,” Chouhan said.

As per official sources, all events for Wednesday, including CM’s tour to Damoh district, are likely to be postponed. “We’ve sent two ministers — Tulsi Silawat and Ram Khelawan Patel — to the accident spot for taking stock of the situation on the ground,” Chouhan informed.

“I’m in constant touch with the officials and police. A sum of Rs 5 lakh has been sanctioned as financial assistance to the families of each of the deceased,” the CM said.  PM Narendra Modi too has released Rs 2 lakh out from the PM Relief Fund as ex-gratia for each of the bereaved families, besides Rs 50,000 for the injured being treated at the hospital.

How did the mishap happen?

A young girl, whose brother Ritesh Maurya (also on board the bus) is still untraceable, told journalists at the hospital, “Owing to a huge traffic jam at the main route — the Chhuiya Ghati highway (which connects Sidhi to Satna via Rewa’s Govindgarh) — the driver took the bus through a circuitous route, which was long. Possibly, to compensate for the lost time, he was driving at a very high speed ignoring the passengers who asked him to slow down.”

After the bus travelled for around 80 km, it went out of control near the canal and plunged into it.

As per the informed sources, the Chhuiya Ghati (NH-75) is the straight route connecting Sidhi with Satna, but for the last three-four days, there is a prolonged traffic jam on it, which possibly forced the driver to take a different route.

State Transport Minister Govind Singh Rajput said a primary probe has revealed that the bus had taken a 7 km-diversion which wasn’t sanctioned in its permit. The permit for the has been terminated.

A young girl Shivrani and fellow villagers at the spot turned out to be the savior for seven people (but one of the survivors died later at the hospital).   Local MP Riti Pathak and party MLA Sharadendu Tiwari, who were among the first politicians to reach the spot, introduced the braveheart to the media.

“She saved a woman and an elderly man by jumping into the canal,” the BJP MP said.

Shivrani said, “I, my brothers, and some villagers were near the canal when the incident happened. We just jumped into the canal to save some lives. We didn’t mind the strong current and depth of the canal. I myself managed to save two passengers.”