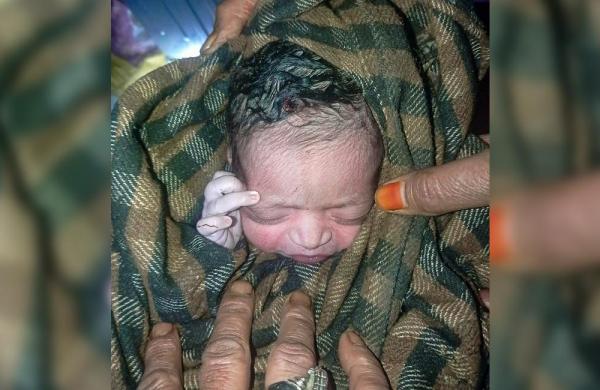 By PTI
SRINAGAR: The joy of Gulam Rabani, a casual labourer in North Kashmir’s Kupwara district, knew no bounds when he finally cuddled his baby girl who was born in an Army vehicle in adverse weather, officials said here on Tuesday.

The child was born on Monday when the mother was being shifted to a hospital for delivery in the Army vehicle, they said.

The Army, which often provides relief like medical facilities to the locals living along the Line of Control, got a distress call from an Accredited Social Health Activist (ASHA) worker of Kalaroos area in the frontier district about the deteriorating condition of a pregnant woman, they said.

“In the early hours of February 1 at around 4:15 am when it was snowing, the Kalaroos company commander received a distress call from the ASHA worker requesting for immediate evacuation of a patient in labour pains to a local hospital from Narikoot village, as the ambulance could not honour their request due to the inclement weather,” an official said.

Immediately, an Army Gypsy along with a medical team was sent to Narikoot for evacuating the patient.

“Enroute to the hospital, the ASHA worker accompanying the patient requested the team to park the vehicle by the road side as patient’s condition was serious.

She along with the Army medical team decided to carry out the delivery inside the Gypsy and got into action in low visibility and snow conditions,” the official said.

The official said that the newborn’s first cry heralded her arrival into the world, bringing joy to everyone involved in the delivery and tears in her father’s eyes.

Rabani cried with happiness and thanked everyone present for bringing his child into the world under the most adverse circumstances, the official said.

The company commander of the Army in the area congratulated the family with gifts and felicitated the brave ASHA worker, Sadia Begum, for her confidence in the Army medical team and her decisiveness in odd circumstances, the official said. In another swift action, the officials said, a British skiing enthusiast, Lachlan Stewart, who was on a trip to the famous hill resort of Gulmarg in north Kashmir, was rescued by the Army after he lost track while skiing at Afarwat on January 31.

“After struggling for two hours in heavy snow, he reached the other side of Afarwat towards dense jungle at around 5 pm.

Having landed up in a ‘no telephone signal’ zone, the individual was unable to contact his hotel staff or anyone else,” the official said.

He said the tourist was spotted by an Army patrol party of Gulmarg Battalion and was rescued to their nearest Company Operating Base.

“It was a great relief for the individual as he was drenched after negotiating nalas and snow in the wilderness.

He was treated with great hospitality as per the ethos of the Army, and was given a new pair of shoes, socks and warm refreshments,” the official said.

Later in the evening, Stewart was dropped by the Army to his hotel in Gulmarg, he said, adding the tourist thanked the Army for the life-saving effort.