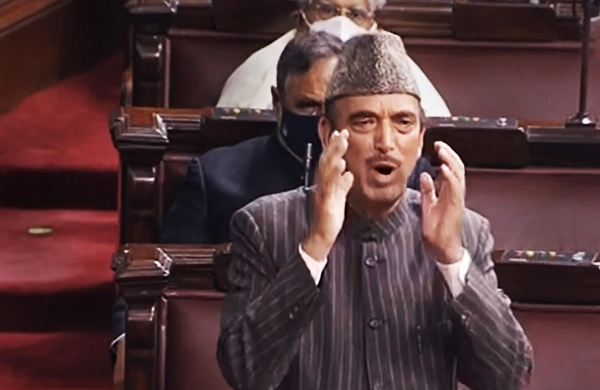 By PTI
NEW DELHI: Questioning the ruling NDA on whether it wanted permanent UT status for Jammu and Kashmir, Leader of the Opposition in Rajya Sabha Ghulam Nabi Azad on Monday batted for the restoration of its statehood, saying development had halted, there was an increase in unemployment and industries were closing, making survival difficult in the region.

The former Jammu and Kashmir chief minister said, “I want to ask Home Minister Amit Shah if the present cadre was working well then what was the need to merge it? You had promised that the statehood will be restored.

“But bringing this bill creates suspicion that GoI wants to keep J&K permanently a union territory.”

Opposing the Statutory Resolution and Legislative Business (Bill for Consideration and Passing) – the Jammu and Kashmir (Amendment) Bill 2021 as the first speaker, Azad said it was perhaps his last speech in the House and he didn’t want to use harsh language but contrary to the government’s tall promises behind converting J&K into UT, development had been stalled, industry couldn’t enter and unemployment was on the rise.

Minister of State for Home G Kishan Reddy had earlier moved a motion for considering the bill and a statutory resolution on the draft law in Rajya Sabha.

The senior Congress leader said Article 370 had only two conditions – outsiders couldn’t buy land or work there which had been in place since the time of Raja Hari Singh.

Saying that only small chunks of land were there due to the region being mountainous and full of forests, he said on scrapping of Article 370 many MPs were elated to buy land but he had told them that land was too costly there and “even I couldn’t afford to buy” it.

The earlier law ensured locals had jobs but now no new industries were coming up and even existing firms were shutting operations, he said, adding seven districts out of 10 in Jammu province had no industry and no proper rail connectivity.

The condition of national highways is dilapidated and ceasefire violations have risen causing severe damage to land and property, he said and added that water supply was in shambles, while power tariff had risen abnormally to Rs 350 per unit from Rs 90 per unit.

Tourism had taken a toll on account of months-long curfew earlier and then due to COVID-19 pandemic, schools, colleges and universities were closed and no salaries were being given to teachers.

Had there been elected representatives they could have taken responsibility and addressed the issues, he said.

Drawing Home Minister Amit Shah’s attention towards PhD and MPhil qualified 3,000 teachers, he said they were living from hand to mouth, barely being given Rs 3,000 a month and were on probation for 7 years.

He said no where does this happen.

“Give attention to such issues. Probation happens for six months. Had there been Assembly they should have gone there with their plight but they are forced to come to me. They can’t afford milk for infants on such a meagre salary,” Azad said.

He said likewise 15,000 medical assistants and pharmacists were jobless.

“Give statehood and conduct elections,” Azad demanded and said it is a border region and both the enemies — Pakistan and China — are sitting on our heads, and under the circumstance the government should strive to win the hearts of locals and strengthen its hands.

He said people of Kashmir had always been with India and recalled how Kashmiris, including women and children, resisted Pakistan’s bid to capture the region in 1948, till the Indian Army reached there.

Azad also said that though it was Muslim-majority state, the executive remained largely Hindus and urged the government not make “Kashmir a guinea pig for experiments.”

While participating in the debate, BJP’s Dushyant Gautam said that political parties in the state were exploiting the people under the guise of Article 370.

AIADMK’s A Navaneethakrishnan said the state requires more all India services cadre officers to implement the development schemes in the Union Territory.

“It is for a good purpose. These amendments has been brought on. I welcome it and support this bill,” he said, adding that considering it is a border state, with threats from Pakistan and China, J&K should remain under the direct control of the Union Government.

Manoj Kumar Jha of RJD wanted to know whether the changes proposed under the bill were temporary or permanent in nature.

He also wanted to know from the government whether there had been any increase in fresh recruitment in militancy in the valley after the change of J&K’s status.

Ashok Siddharth of BSP also supported the bill, however, said earlier 50 per cent of the state cadre KAS officials were elevated to IAS cadre but after this, their elevation would be reduced to only 33 per cent and this should be looked into.

Sushil Kumar Gupta of AAP said the government should take steps to normalise the situation in J&K and restore its full statehood as promised earlier.

Shamsher Singh Manhas of BJP said UTs of J&K and Ladakh have several development schemes which are getting implemented.

“This is the only area where three AIIMS have been granted. One each for Jammu, Kashmir and Ladakh. It has also got one IIT and IIM,” he said, adding a new ring road for Jammu is also being constructed.