Awakened by taking out procession to support Ayodhya temple construction 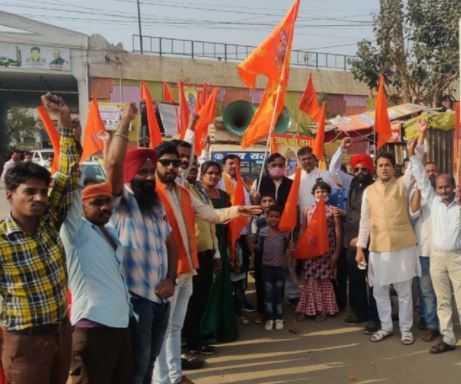 In order to send maximum amount of support for the construction of Lord Shri Ram temple in Ayodhya from Raipur, the public is being made aware by taking out a procession. Under this, the Bharatiya Janata Party workers took out a huge Shobha Yatra in the hospitality of BJP District President Srichand Sundarani from Kali Mandir in Rajendra Nagar. It was attended by hundreds of BJP workers as well as distinguished citizens of the region. The yatra passed through Rajendra Nagar, Budhi Maa Temple, Kota Talab through the surrounding areas. On the way, we were welcomed everywhere. District Publicity Minister Rajkumar Rathi said that the grand Shobha Yatra of Lord Shri Ram, led by Divisional President Ravindra Singh Thakur and Councilor Vilas Sutar, visited the entire ward with the eagle and reached the Sai Mandir in Mahavir Nagar.