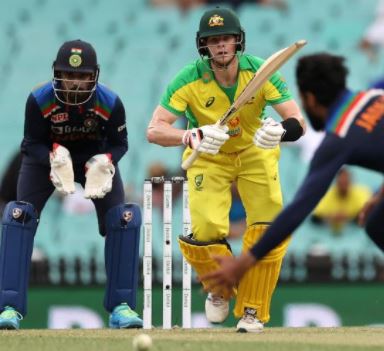 Australia has set a target of 390 runs in front of India in the second one-day cricket match played at the Sydney Cricket Ground. Australia captain Aaron Finch won the toss for the second consecutive match and decided to bat.

Captain Australian Finch and David Warner gave a good start to the Australian team after winning the toss and came to bat first. Both batsmen scored 59 runs in the first powerplay. In the 11th over, David Warner completed the 23rd half-century of his ODI career. He scored a mastermind in just 39 balls with the help of 6 fours and 2 sixes. Both then added 117 runs in 20 overs.

Captain Aaron Finch batted strongly in the second consecutive innings and completed the half-century with the help of 5 fours and 1 six in 60 balls. However, on a personal score of 60 runs, he was caught by Mohammed Shami at the hands of Virat Kohli. After this, second success was given to India by Shreyas Iyer. He dismissed David Warner for a score of 83.

The third half-century of this innings was scored by Steve Smith for Australia. He completed 50 runs in 38 balls with the help of 5 fours and 1 six. In this match, he scored a century in 62 balls, but after scoring 104 runs in 64 balls, he was caught out by Mohammad Shami on the ball of Hardik Pandya. Marnus Labushane scored a brilliant knock of 70 off 61 balls and he was caught out by Mayank Agarwal off Jasprit Bumrah.

Glenn Maxwell played his second consecutive storming innings for the Australian team. He scored a half-century in just 25 balls and remained unbeaten after scoring 63 runs in 29 balls. In this, he hit 4 fours and 4 sixes.

The Indian team has landed without any change, while the host team has made a change. Moises Henriques has been included in the playing eleven for this match in Australia’s team in place of injured all-rounder Makzas Stoinis. Stoinis was injured during bowling in the previous match and could not complete the over.