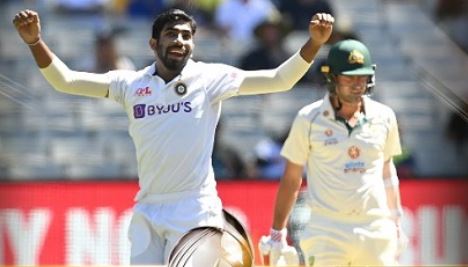 Ravichandran Ashwin stole the show with two wickets while pacer Jasprit Bumrah provided India an early breakthrough to put Australia on the back foot in the first session of the Boxing Day Test here at Melbourne Cricket Ground on Saturday.

Joe Burns (0) failed to capitalise on the start he got in the last Test as India drew the first blood. If Bumrah provided India an early breakthrough, it was Ashwin who stole the show with his two wickets (Wade and Smith) in the first session.

The Tim Paine-led side’s score read 65/3 at the end of the first session on the first day. Marnus Labuschagne and Travis Head are currently unbeaten on 26 and four runs respectively.

After opting to bat first, Australia got off to the worst possible start as pacer Jasprit Bumrah dismissed Burns for a ten-ball duck in the fifth over. Labuschagne then joined and Mathew Wade and in the middle and the duo tried to stitch the innings for the hosts as both batters saw off the early spell of Bumrah and Umesh Yadav.

However, Ravichandran Ashwin dismissed Wade as he skied the ball, and all-rounder Ravindra Jadeja took a spectacular catch while running back.

Ashwin then dismissed Steve Smith for a duck to put visitors on top. The Indian spinner’s back to back wickets left Australia at 38/3. Head then joined Labuschagne and the duo ensured that the hosts did not lose any more wickets before the end of the first session.