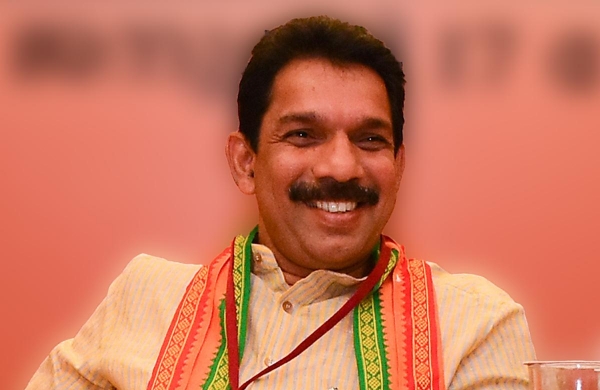 By PTI
BENGALURU: Karnataka BJP President Nalin Kumar Kateel has dismissed as fake an audio clip that hints at possible leadership change in the State, and said it was not his voice.

The clip has gone viral, fuelling a new round of speculation on whether replacing the 78-year old Chief Minister is on the cards.

ALSO READ:  BS Yediyurappa to step down as Karnataka CM in July end?

On his return from the national capital, Yediyurappa rubbished talks in some quarters that he is on way out, and asserted that the central leadership has asked him to continue in the post. The surfacing of the audio clip on Sunday has led to political buzz again on the leadership issue.

Kateel has termed the brief audio as “fake” and has demanded an inquiry into the tape where the talk was about “removing the entire team” without mentioning Yeddyurappa’s name.

“Don’t tell anybody. The entire team of Eshwarappa, Jagadish Shettar (Ministers) will be removed. We are making a new team,” the conversation went.

“Three names are there (for CM’s post) but they won’t be considered. They’ll put (appoint) from Delhi itself,” he added. Eshwarappa, who was earlier the state BJP President, is currently the Rural Development & Panchayat Raj Minister, whereas Shettar, a former chief minister, is the Industries Minister in the Yediyurappa cabinet.

However, clarifying on the audiotape, Kateel in Mangaluru said, he has nothing to do with it. “I’m writing a letter to the Chief Minister urging for a complete inquiry about it. Let the truth come out through inquiry. Several such incidents have happened in the past in politics, it is not right, let there be an inquiry,” he said.

Reiterating that no discussion had taken place regarding the leadership or any other change in the party, Kateel said, so such a talk is “irrelevant”.

“Yediyurappa is the ‘aatma’ (soul) of our party, he is our unanimous leader and senior to all of us, he has built the party to this level after several years of struggle. Also, Eshwarappa and Jagadish Shettar are like two eyes, under the guidance of such senior leaders the party and the government will function,” he said.

Stating that he will not blame anybody for the audiotape without an inquiry, the state BJP chief said, facts will come out through inquiry. To a question on whether the voice in the audiotape resembles his, he said, “I have nothing to do with it. Let the truth come out through inquiry. I will write to the CM for inquiry. I will cooperate with the inquiry.” After his meetings in Delhi, Yediyurappa on Saturday said, “So far, no one has asked me to resign.

If there is any such news, there is no value to it. “However, speculation about his replacement refuses to die down, as Yediyurappa has convened the BJP legislature party meeting on July 26, on the occasion of completion of two years in office.”

‘Time for all to work towards ensuring change of govt in 2024’, says Pawar at Opposition leaders rally