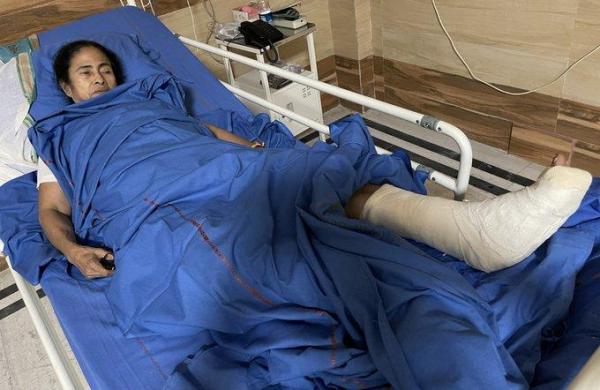 The Chief Minister, who was on a two-day visit to Nandigram from where she filed her nomination earlier on Wednesday, alleged that she was pushed by a few unidentified people during her election campaigning.

She was brought to Kolkata’s SSKM Hospital by road from Nandigram.

leader Partha Chatterjee has said that the party will raise the incident of the attack over West Bengal chief minister Mamata Banerjee with the Election Commission on Thursday.

“Those who are cowards have been constantly trying to stop Mamata, but no one could stop her, today’s incident shows that the attack on Mamta Banerjee was a conspiracy, first the state’s Additional Director General of Police (ADG) law and order was changed, after that the state Director General of Police was removed, now this incident happened,” Chatterjee told reporters outside the hospital where Mamata Banerjee has been admitted.

“We (TMC party leaders) have decided that tomorrow we will go to the Election Commission and keep this matter in front of the constitutional authority,” he added.

Banerjee was brought to Kolkata’s SSKM Hospital by road from Nandigram, where she was campaigning for the upcoming Assembly polls in the state. She was wheeled into the hospital on a stretcher.

The chief minister, who was on a two-day visit to Nandigram from where she filed her nomination earlier on Wednesday alleged that she was pushed by a few unidentified people during her election campaigning yesterday.

She sustained “severe bony injuries” on her left foot and ankle as well as bruises and injuries on her shoulder, forearm and neck, according to the report of her initial medical examination.

While Mamata Banerjee is seeking her third consecutive term, BJP has set a target of winning 200 seats in the 294-member state Assembly. Congress and the Left have stitched the alliance for the polls and had already finalised the seat-sharing agreement. They are also in touch with the Indian Secular Front (ISF), recently floated by influential minority leader Abbas Siddique.

In 2016, West Bengal Assembly elections, out of the 294 seats, Congress had managed to win 44 seats while the Left Front bagged 33 seats. The ruling TMC secured 211 seats and the BJP had won 3 seats.

The BJP made deep inroads in the state in the 2019 Lok Sabha elections winning 18 seats and decimating TMC’s tally to 22. Out of the total 42 Lok Sabha constituencies in West Bengal, Congress won two seats, the Left drew a blank.

After BJP’s performance in the 2019 polls, several TMC leaders have joined the party.