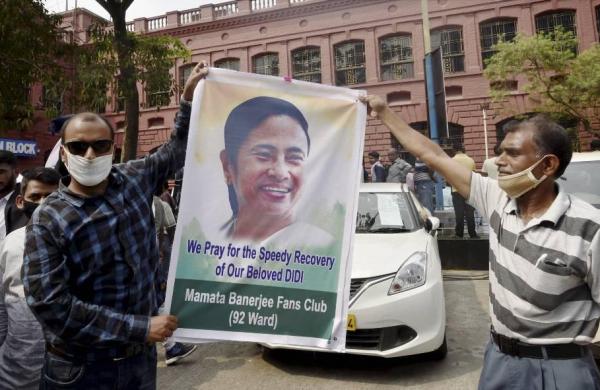 By PTI
KOLKATA: The health condition of West Bengal Chief MInister Mamata Banerjee, who is nursing injuries suffered during poll campaigning at Nandigram, is stable and her improvement is satisfactory, doctors said on Friday.

Banerjee slept well at night and is responding well to treatment, said doctors at the state-run SSKM hospital, where the TMC supremo was rushed to on Wednesday after being allegedly pushed by unknown people while campaigning for the assembly elections in Nandigram in Purba Medinipore district.

“Our team will review her condition this morning. They may cut open the temporary plaster on her left leg to see how the injury has healed. A few medical tests might also be conducted,” a senior doctor told PTI.

The swelling on her left ankle has subsided and she is feeling less pain in her neck, shoulder and waist, he said.

“We generally advise patients with similar injuries as that of Banerjee at least three to four weeks of rest,” the doctor said.

The 66-year-old chief minister will try out different kinds of wheelchairs soon, he added.

Asked when Banerjee could be discharged from hospital, the doctor said the team would be assessing her health condition on Friday morning and take a call accordingly.

The Trinamool Congress boss had suffered injuries on her left leg and waist as she fell on the ground following the alleged attack.

She is undergoing treatment at the 12.5 special cabin of Woodburn Block at SSKM Hospital.