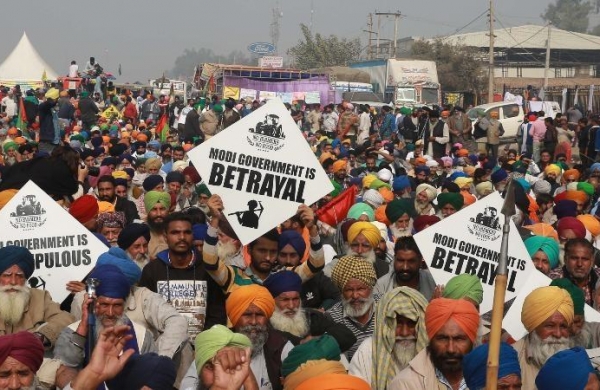 By PTI
SIRSA: A court here on Thursday granted bail to the five farmers who were arrested for sedition and other charges after an alleged attack on Haryana Assembly Deputy Speaker Ranbir Gangwa’s car here.

In a related development, senior farmer leader Baldev Singh Sirsa, who had gone on an indefinite fast as a protest against the arrests, broke his fast.

He was offered coconut water by farmer leaders here.

After the release of the five farmers, the protesters who were sitting on a dharna here called off the Friday’s proposed Sirsa bandh.

A senior farmer leader and key member of the Samyukta Kisan Morcha (SKM), Jagmohan Singh, told PTI that 80-year-old Baldev Singh Sirsa has ended his fast after the release of five arrested farmers.

When contacted over the phone, Superintendent of Police confirmed that the arrested farmers have been released after being granted bail by the court.

Earlier on Wednesday, protesting farmers had blocked a national highway here at three different points to demand the release of the five protesters, who were arrested last week.

The Samyukta Kisan Morcha, an umbrella body of various farmers’ unions spearheading stir against the farm laws, had also demanded the withdrawal of cases, including sedition charges, against over 100 protesters booked in connection with the attack on Gangwa’s car on July 11.

Before Sirsa ended his fast, the SKM in another statement issued earlier in the day had said that he had turned weak and lost six kilograms owing to his fast.

Sirsa’s blood pressure and blood sugar level had dropped, the statement had said.

A team of the Health Department here had been regularly monitoring his health.

The police had earlier booked over 100 people, mostly unidentified, for sedition, obstructing public servants in discharge of their duty, murderous attempt on an elected representative and damaging public property after the attack on the deputy speaker’s vehicle.

The protesting farmers had earlier claimed that the administration had not been able to show any video or other evidence to prove that the farmers indulged in violence on July 11.