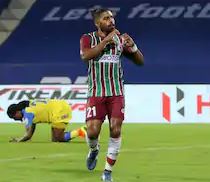 ATK Mohun Bagan got off to a good start in the 2020-21 Indian Super League (ISL) season with a narrow 1-0 win over Kerala Blasters at the GMC Stadium, Bambolim on Friday.

Roy Krishna’s 67th-minute strike was enough for Habas’ team to secure three points in the club’s first-ever ISL match. It was a cagey start as both teams adopted a safety-first approach. Yet, Bagan could have had their noses in front had Krishna not scuffed his shot at the far post after latching on to a corner whipped in by Hernandez early on in the game.

In their new avatar, ATK Mohun Bagan kicked off the seventh season of the Indian Super League on a high, defeating Kerala Blasters by a solitary goal here on Friday. Fijian hitman Roy Krishna, who was ATK’s top goal scorer with 15 goals last season, struck the all important goal after a 67 minute deadlock to give the all important three points for the green-and-maroon brigade.

The Yellow Brigade playing with a heavy defensive lineup of 4-2-3-1 managed to thwart ATKMB throughout the first half but after the hour mark they left a loose ball as the Fijian International pounced on it with a calm and composed finish. All eyes were on the 131-year-old legacy club Mohun Bagan as they were making their ISL debut following their ‘marriage’ with three-time defending champions ATK.

The match had an interesting sub-plot as Kibu Vicuna, who had guided Mohun Bagan to their fifth I-League title last season, sat in the opposite dugout in KBFC jersey, while the most successful ISL coach Antonio Lopez Habas was at the helm of ATKMB. Habas named a predictable 3-5-2 lineup with their star signing Sandesh Jhingan helming the defence in his first outing after a lengthy injury layoff of more than 12 months.

ATKMB had a dominant first half and made some early inroads with Roy Krishna missing an early chance, even as KBFC enjoyed more ball possession in the first 45 minutes.