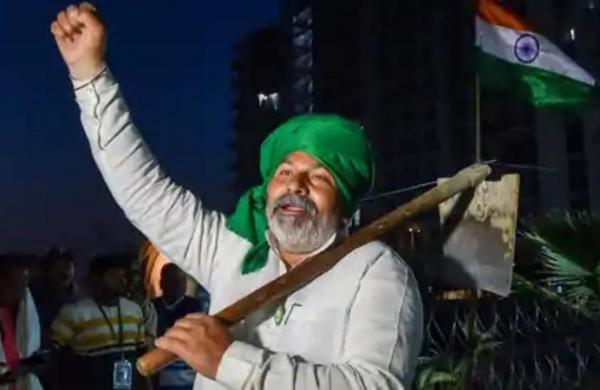 By PTI
NEW DELHI: The demand for cutouts of Rakesh Tikait at Singhu border underlines the growing popularity of the farmer leader credited with reviving the farmers’ movement against the Centre’s farm laws following violence during a tractor rally on Republic Day.

Roadside stalls selling badges, posters and other literature related to the farmers stir are a common sight at Singhu border.

Wasim Ali, who has set up such a stall at the protest site, says hand-held cutouts of Tikait are a big hit among the crowd.

“Each cutout of Tikait is priced at Rs 20. I have been selling the cutouts since the last few days as they are in high demand,” he said. Around 700-800 such cutouts are sold every day, said Ali, a resident of Bawana in north west Delhi.

“I usually buy these cutouts from Sadar Bazar and sell them here. These are the most demanded items at my stall,” he added.

Tikait’s image received a massive boost after he defiantly announced to continue the agitation, even as a large posse of Uttar Pradesh police personnel gathered at Ghazipur protest site after the Republic Day violence, with rumours rife that he might be arrested.

A section of protesting farmers had entered Delhi and reached up to ITO and Red Fort in the heart of the national capital during their tractor rally on January 26.

In clashes between police and farmers, scores were injured and property, including buses, were vandalised.

The Bharatiya Kisan Union (BKU) leader was unwell when a large number of UP police personnel gathered at Ghazipur border where he had been camping for over two months in protest against the contentious farm laws.

A cornered Tikait, however, addressed a huge crowd at the protest site, which has now become a focal point of the agitation, after his teary-eyed speech was beamed by news channels amid dwindled presence at Ghazipur border after the January 26 violent clashes.

He had reaffirmed the resolve of the farmers, saying “they won’t relent or retreat”.

Tikait’s emotional appeal galvanised thousands of farmers from western UP as well as Punjab and Haryana, who took to road to join the agitation that had faced the threat of petering out in the wake of the January 26 episode.