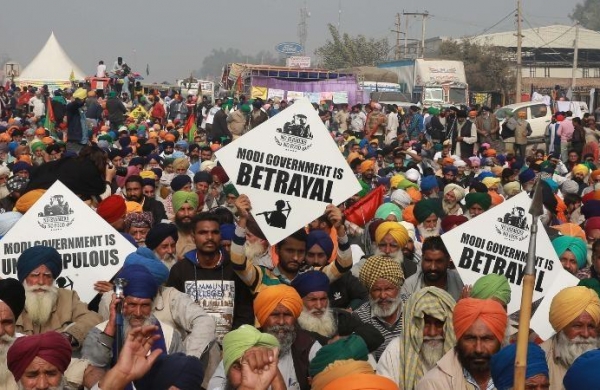 By PTI
NEW DELHI: The second day of ‘Kisan Sansad’ being held at Jantar Mantar here saw a 37-year-old man acting as the agriculture minister, who subsequently resigns after failing to answer questions related to farmers’ issues.

Thousands of farmers have been pressing for their demand to repeal the three new farm laws enacted last year.

Ravneet Singh Brar, who hails from Punjab’s Muktsar and holds an MBA degree, was chosen to play the role of the ‘Krishi Mantri’ at the Kisan Sansad for a day, which he felt was a “big opportunity”, as he too belongs to a family of farmers.

He has been an active participant in the farmer’s protest at Singhu border since day 1 and is also the spokesperson of Bharatiya Kisan Union (Kadian).

The Kisan Sansad will continue till August 9 as permitted by LG Anil Baijal.

Slogans were raised against Brar and he was shamed every time he failed to give a satisfactory response to the members of the Kisan Sansad.

He and his “government” were also termed anti-farmer and called the “slaves” of the corporate world.

Brar tried his best to defend himself.

“As an agriculture minister, I responded to all their questions but when I felt the sansad members had put up a legit question and I did not have answers to it, I adopted the strategy to ignore it and slowly diverting the attention of the sansad towards other matters,” he told PTI.

The Krishi Mantri at the Kisan Sansad was shamed again when the sansad asked him about his stand on the Minimum Support Price and why it was not being implemented as a law.

The Krishi Mantri of the Kisan Sansad was also accused of misguiding the sansad by its deputy speaker when Brar failed to give satisfactory explanation.

“When I was asked questions by the sansad members (kisan bhai), I couldn’t speak to them eye-to-eye. Somewhere, I felt they were asking legit questions to me, I could see and feel the pain in their eyes. I failed to address farmers’ issue. I said Kisan Ekta Zindabad and decided to tender my resignation,” Brar said.

Stressing on the power and responsibility that comes with the spot, Brar said, those in power today should not forget their roots and should sincerely work for the people of this country.

When asked what the questions he faced, Brar said, “I was asked what was black in the bills? I knew what was (wrong) with the bill. I never had answers to their questions, so I tried to defend it by diverting their attention to other issues.”

Meanwhile, the government has no record of farmers who have died during the agitation at Delhi’s borders against three new farm laws since 2020, Agriculture Minister Narendra Singh Tomar informed Parliament on Friday.

Tomar also said the government has not undertaken any study to ascertain the apprehensions in the minds of farmers about the three farm laws.

Thousands of farmers, mainly from Punjab, Haryana and western Uttar Pradesh, have been camping at Delhi’s borders since eight months in protest against the three laws.

Asked if the government was aware of the total number of farmers who have died during farm protest since 2020, Tomar said: “The Government of India has no such record.”

However, the Central government during discussions with farmers’ unions had appealed to them that children and elders, especially women, should be allowed to go home in view of the cold prevailing at that time and the COVID-19 situation, he said in a written reply in the Rajya Sabha.

Further, in a separate reply, Tomar said, “No study has been undertaken to ascertain the reasons for apprehensions created in the mind of farmers on account of these farm laws.”

However, the Centre has proactively undertaken efforts to reach out the farmers to remove their apprehensions, he added.

Asserting that the government is serious and sensitive towards farmers issues, the minister said the Centre has been engaged in active discussions with the farmers’ unions.

So far, 11 rounds of negotiations have been held between the government and agitating farmers’ unions to resolve the issues, he added.

In all the rounds of discussions, the government has stressed that instead of insisting on repealing the laws, the farmer unions should discuss about their concerns on specific clauses so that their issues can be resolved, he added.

“During various rounds of discussions, the government continuously requested the farmers unions to discuss the provisions of the farm laws, so that if there is an objection to any provision, the advancement can be made towards resolution of those. But the farmers’ unions insisted only on the repeal of the farm laws,” he said.

The last round of talks between the government and unions was held on January 22.

The Supreme Court has put on hold the implementation of the three laws till further orders and set up a committee to find solutions.

The committee has already submitted its report.