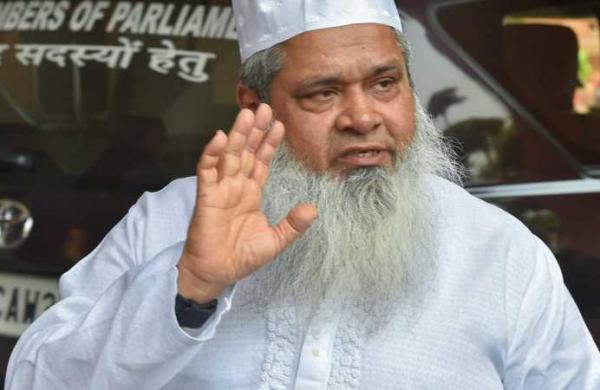 Express News Service
GUWAHATI: There are rumblings in poll-bound Assam’s Congress-led grand alliance of Opposition parties even before they meet and hold discussions on seat-sharing arrangements.

Apart from its traditional bastions, the minority-based All India United Democratic Front (AIUDF) is seeking to contest from some Muslim-majority seats which are currently held by the Congress.

Congress, AIUDF, CPI, CPM, CPI-ML and regional Anchalik Gana Morcha are the six constituents of the grand alliance. They came together last month to put up a united fight against the ruling BJP.

“Haven’t you elected Mujibur Rahman in advance from the Dalgaon seat? We are a constituent of the grand alliance, so I cannot say if Rahman will be the consensus candidate. But you can say it. Who do you want? I will show this video of yours at the meeting of the grand alliance. I will say the demand for Mujibur is huge,” AIUDF chief and Lok Sabha member Maulana Badruddin Ajmal told a crowd at a rally in Dalgaon.

Apart from Dalgaon, the AIUDF has set its sights on Baghbor, Sarukhetri and Mankachar seats, all of them held by the Congress. Ajmal has already held a rally at Sarukhetri.

The Dhubri MP said in the event of a disagreement, AIUDF and Congress will go for a friendly contest at Dalgaon.

“What if the grand alliance doesn’t accept Rahman’s candidature from Dalgaon? Are you all ready if there is a friendly contest? Rahman stands a good chance to win the polls,” Ajmal, who is also a perfume baron, said addressing the crowd.

He said Congress and AIUDF could face a Dalgaon-like situation in two to four other constituencies.

Ilias Ali, the sitting Congress MLA from Dalgaon, said he failed to comprehend why the AIUDF was eyeing this seat.

“Since I am the sitting MLA, it is natural that I will contest from the seat. I don’t know why Ajmal wants to field someone from his party here,” a confused Ali said.

He said a third party will benefit from the split of votes if both Congress and AIUDF contest from the seat.

The constituents of the grand alliance are likely to meet this week and discuss seat-sharing arrangements.

The Congress had appealed to Asom Jatiya Parishad (AJP) and Raijor Dal, two regional entities floated last year against the backdrop of the agitation against the controversial Citizenship (Amendment) Act, to join the grand alliance. But they are working towards forming a united front of regional forces. AJP, Raijor Dal and Autonomous State Demand Committee have already forged an alliance.

“We are yet to hold discussions with the other components in the grand alliance on seat-sharing arrangements but we (Congress) have five-six qualified faces in each of the 126 seats,” Bora asserted.