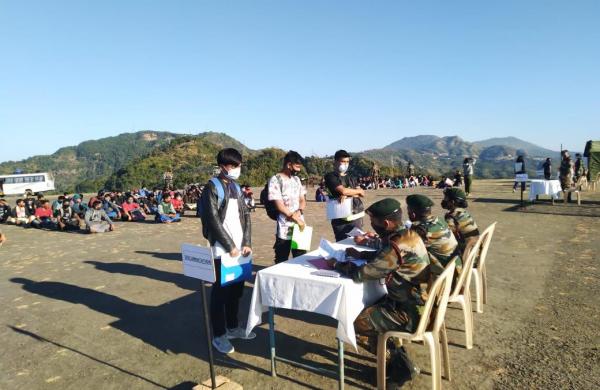 Express News Service
AIZAWL: Aiming to engage the youth of Mizoram positively, paramilitary force Assam Rifles (AR) has initiated the first of its kind training capsule for the girls of Mizoram state.

“AR has initiated the first of its kind pre- induction coaching programme with 60 girl candidates to prepare girls for clearing the Military Nursing Services exams of the Indian Army.” tells Brigadier Digvijay Singh.

Also, running parallel is another training programme for boys and girls to join the various uniformed Forces of the country.

Assam Rifles is a Paramilitary force and Brg Digvijay Singh is the Commander of its 23 Sector entrusted to look after the management of the borders of one of the smallest but strategically important state of Mizoram. AR also bears the responsibility of States its internal counter-insurgency operations and aiding the civil administration in case of need. Mizoram shares borders with Myanmar and Bangladesh.

The MNS Pre Guidance six- week capsule is being run by Assam Rifles in cooperation with Mizo Zirlai Pawl (MZP), a local Non-Governmental Organisation (NGO) Classes are conducted for two hours a day, six days a week for the potential candidates for MNS to train them to crack written exam and interview. It started with effect from 01 Mar 2021.

BSc 2nd year student Chhawn Thangpuii hails from the Serchhip district of the state. For students like her, this programme has come as a boon.

“There is not much awareness in our area and even after having interest in medical I had financial constraints and was not aware of the MNS.”

This programme has brushed my subjects which will help me with the exam, tells Thangpuii.

Military Nursing Officer (MNS) is an auxiliary force of the Indian Armed Forces where only the women officers serve as nurses in uniform with the status of a Commissioned Officers. It comprises of only women officers of MNS.

In another such programme, 100 boys are being trained for the written and interview portion of the recruitment process of the armed forces. Brigadier Digvijay Singh, Commander 23 Sector, Assam Rifles Mizoram Sector says, “This is just a beginning and many such programmes with a larger goal are in our planning list which will open greater avenues and brighter opportunities for the girls and boys of Mizoram.”

The aim lies to divert the youth into productive activities so as to wean them from falling prey to addictions.

The state has been facing the menace of narcotics, drugs and contraband leading to rise in the cases of addictions.