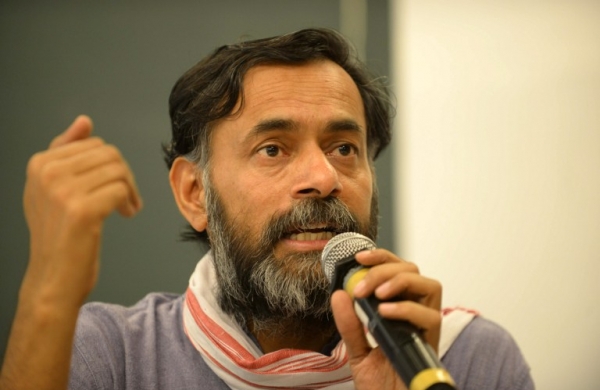 “Gogoi has put up 19 candidates in the 86 seats in the first two phases. His goal is to ensure that the BJP is defeated,” Yadav said.

“We have come with one message that the BJP should be ousted for the way it has treated farmers and taken decisions against their interests and welfare,” the Samyukt Kisan Morcha leader said.

Yadav said that he had met Gogoi in jail in February last year and his health condition has deteriorated considerably since then.

“He has been subjected to considerable mental torture and his medical condition has deteriorated but still the ideological clarity, mental resolve and the courage shown by him is a model,” he said.

Yadav alleged that Gogoi has been put in jail to ensure that he cannot interact with the people during the elections.

“This is not a criminal trial but a political trial,” he alleged.

Yadav said that he had not gone to discuss politics but Gogoi was very interested to know how the farmers’ agitation was progressing and was very clear about the urgent need to defeat the BJP.

Sunilam alleged that the way NIA is investigating the cases against Gogoi it appears that they are acting at the behest of the government.

“It is obvious that false cases have been slapped against him to silence peoples’ voice, which he represents, but now that the elections are here, the people of the state must make a decision,” he said.

He appealed to the Congress to reconsider their decision of fielding a candidate against Gogoi.

Sunilam said that he would go to Sibsagar to campaign for Gogoi.

Gogoi was arrested in December 2019 during the protests against CAA in the state and was booked under the stringent UAPA.

He had tested positive for COVID-19 some months back and shifted to the Gauhati Medical College and Hospital where he is still lodged with a board of doctors monitoring his condition.

Sibsagar goes to the polls in the first phase on March 27 along with 46 other constituencies.

Elections to the 126-member Assam legislative assembly will be held in three phases with 39 constituencies in the second phase on April 1, and 40 in the last phase on April 6.