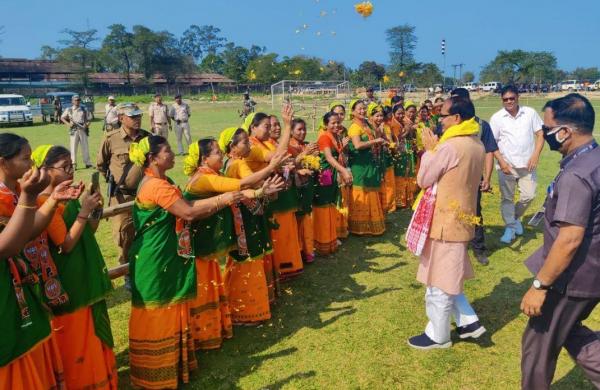 Express News Service
GUWAHATI: Madhya Pradesh Chief Minister Shivraj Singh Chouhan on Monday lashed out at Congress leader Rahul Gandhi by accusing him of following in the footsteps of Muhammad Ali Jinnah and not Mahatma Gandhi.

His diatribe stemmed from the Congress’s poll alignment with minority-based All India United Democratic Front (AIUDF) in Assam, Indian Union Muslim League in Kerala, and Indian Secular Front, floated recently by a cleric of Furfura Sharif in West Bengal.

“The Jinnah path will neither be accepted by the people of Assam nor the countrymen,” Chouhan said.

He was livid that the Congress forged an electoral truck with the AIUDF, which is seen by many in Assam as the alleged protector of illegal immigrants. It was floated in 2005 after the Supreme Court, based on a petition, had struck down the Illegal Migrants’ (Determination Tribunal) Act which was allegedly heavily tilted in favour of illegal immigrants. The petition was filed by then Asom Gana Parishad MP and now BJP leader and Assam Chief Minister Sarbananda Sonowal.

“Doesn’t the Congress feel ashamed of joining hands with the AIUDF, which has filled Assam with infiltration? I want to ask if you will honour Ajmal and show disrespect to (former CM) Tarun Gogoi. Rahul Gandhi, give an answer. Why did you forge an alliance with the AIUDF? You tied up with the Indian Union Muslim League in Kerala and the Furfura Sharif in Bengal. What happened to the Congress? The Congress is going to destroy the country,” Chouhan said.

He scoffed at Rahul over his promise of setting up a fisheries ministry, stating that it is already in place and “his (Rahul’s) tube light lit a little late.”

Chouhan accused Ajmal, who is a Lok Sabha member and perfume baron, of spreading poison in the society. He said Gogoi had never compromised with Ajmal and his AIUDF.

“The Congress has ruled Assam for 55 years but what has it given to the state? The Mughals could not defeat Assam due to the heroics of (Ahom general) Lachit Borphukan. Indira Gandhi and Rajiv Gandhi gave only infiltration, violence, agitation and unemployment,” Chouhan alleged.

Also alleging that the Congress has always used the illegal immigrants as its vote bank, the Madhya Pradesh CM predicted that the grand old party would become history under the leadership of Rahul Gandhi and Priyanka Gandhi Vadra.