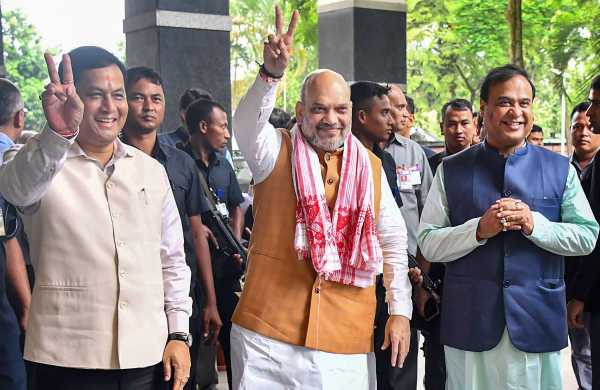 Express News Service
GUWAHATI: The BJP, which heads Assam’s three-party ruling coalition, will have a mountain to climb to achieve its goal of winning 100 of the state’s 126 seats in the upcoming polls.

Cashing in on the Modi wave, it had won 86 seats together with allies Asom Gana Parishad (AGP) and Bodoland People’s Front (BPF) in the 2016 elections. It had also reaped dividends of anti-incumbency and the alleged largescale corruption during the previous Congress regime.

The political scenario this time around, however, is completely different. The challenges the BJP is faced with are the coming together of opposition parties Congress and minority-based All India United Democratic Front (AIUDF). They are the components of a six-party grand alliance of Opposition.

The Congress and the AIUDF did not have any alliance in the last election. Now that they will fight together and will have a seat-sharing arrangement, it is expected to prevent the split of anti-BJP votes.

Secondly, the AGP had dished out a spectacular performance last election by riding piggyback on the BJP. It had won 14 of the 24 seats it contested. The birth of two regional forces — Asom Jatiya Parishad (AJP) and Raijor Dal — is expected to hurt the AGP dear this election, for it has increased the regional options. That the BJP and the AGP are nervous following the AJP’s emergence in the political spectrum is evident from their constant vitriol of the regional party.

The BJP asserted that the AJP would not be a factor in the polls. But the AJP said if that was the case, then what made the BJP go after it on a daily basis.

“They are nervous, for they know we will do well in Upper and Central Assam. There are a lot of tea gardens in the two regions. We will target 30-40% of the seats there,” AJP president Lurinjyoti Gogoi said.

The AJP is the brainchild of students’ organisations All Assam Students’ Union (AASU) and Asom Jatiyatabadi Yuva Chhatra Parishad. The party was floated against the backdrop of the agitation against the Citizenship (Amendment) Act.

Political scientist Akhil Ranjan Dutta of the Gauhati University said the Congress-AIUDF alignment will have an impact on Central Assam.

“The AJP will target the votes of the AGP and the BJP. I feel they (AJP) will cause damage to both BJP and AJP to some extent. The AASU said it would support the AJP. If they do it, both BJP and AGP will suffer,” Dutta observed.

He said the BJP was distributing its resources in a targeted manner, particularly targeting the tea community.

“They have a substantive presence in tea areas. Not only are they distributing the resources, but they are also giving overriding priority to political representation. Pallab Lochan Das, Rameswar Teli, and Kamakhya Prasad Tassa, all of them from the tea community, are now MPs,” Dutta said.

The five Lok Sabha constituencies of Tezpur, Lakhimpur, Dibrugarh, Jorhat, and Kaliabor have 48 Assembly segments. The tea workers have a huge influence on 35-37 of them.

“My reading is that Congress and AIUDF will gain in the Parliamentary constituencies of Nagaon and Mangaldoi in Central Assam and Barpeta and Dhubri in Lower Assam,” Dutta added.

The two parties are also expected to win some of the 15 seats in the Barak Valley. Muslims account for over 50% of the voters.