Assam polls 2021: Congress promises no CAA, Rs 2000 per month for homemakers in manifesto 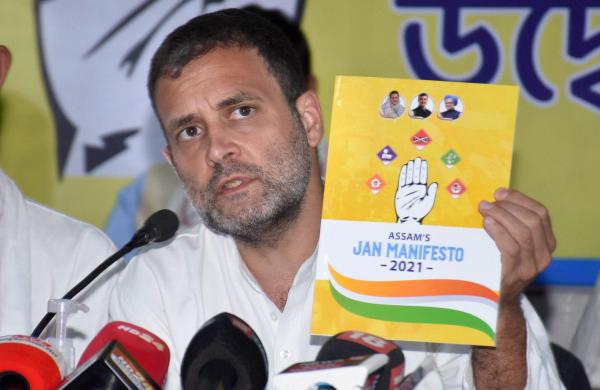 Express News Service
GUWAHATI: The Congress on Saturday released its election manifesto for Assam, making “five guarantees” that included Rs 2,000 per month for every housewife and law to nullify the Citizenship Amendment Act (CAA).

It also promised to provide five lakh government and 25 lakh private-sector jobs, raise the daily wage of tea workers to Rs 365 and free electricity up to 200 units per household. Releasing the document in Guwahati, Congress leader Rahul Gandhi said his party will protect the idea of Assam that is being “attacked” by the BJP and RSS.

The party promised to waive off the debts of farmers and begin the process of identification of illegal immigrants if voted to power. It would waive off the debts of women who have taken loans from micro-finance banks and provide free of cost yarn, loom and other equipment to women, and make their travel in the state transport free.

It had monitored the updation of the National Register of Citizens (NRC) of 1951 in Assam. Gandhi said the document contained the aspirations of the people. “The BJP and the RSS are attacking the diverse cultures of the nation. They are attacking our language, history, ways of thinking and living. This manifesto is about protecting the idea of Assam, its culture and identity,” he said.

He said the manifesto was prepared following discussions with all sections of people. The Congress pledged that holy places such as ‘namghars’ (Vaishnavite prayer centres), temples, mosques, churches, etc, which have attained an age of 50 years, would be provided financial assistance.