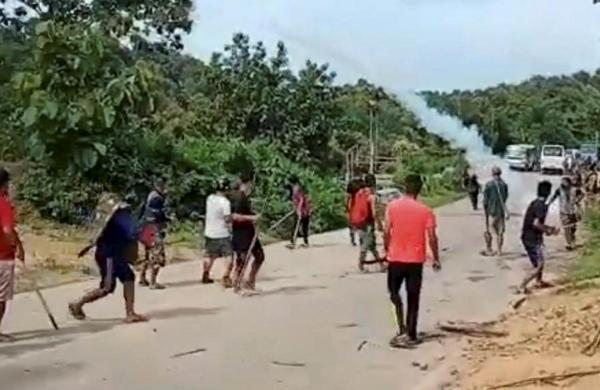 By PTI
GUWAHATI: The Assam Police on Wednesday prevented a Congress delegation from visiting the inter-state border with Mizoram, which had recently witnessed a bloody clash.

Police said that nobody will be allowed to go near the boundary as it has now become a “conflict zone”.

Seven people, including six Assam Police personnel, have been killed and 50 others, including an SP, were injured in a clash along the disputed boundary on Monday.

The Congress delegation led by newly appointed state unit chief Bhupen Bora was stopped near Cachar district’s Dholai police station, eight km from the inter-state border, and the party leaders squatted on the road for a while in protest.

“We had come to review the prevailing situation at the inter-state border so that we could cooperate with the government to deal with it, and inform the people about the actual scenario,” Bora told reporters at Dholai.

He said that the administration’s decision not to allow the Congress delegation to go near the border raised doubts over its claims that the situation was under control and “not an inch of Assam’s land has been encroached upon”.

“We were not going to the India-Pakistan border but to a boundary with a neighbouring state of our country.

We should have been allowed to go near the inter-state border to see for ourselves whether Assam’s land is safe,” Bora said.

Saikia claimed that the delegation had informed the Cachar district administration about their scheduled visit to Lailapur, which it had agreed to earlier but did not allow them during the day.

Cachar Superintendent of Police Ramandeep Kaur said that nobody will be allowed to go near the border as it has now become a “conflict zone”.

Kaur assumed charge during the day from Vaibhav Chandrakant Nimbalkar, who has been injured in the clash and airlifted to Mumbai for better treatment.

“The situation along the border is under control and discussions are underway at a very high level. The CRPF has been deployed at the boundary as a neutral force and security measures have been put in place,” she said.

Dev criticised Chief Minister Himanta Biswa Sarma’s statement that Assam will abide by any law enacted by the Parliament that makes it even cede its land to another state but till then, it will not allow even an “inch to be encroached upon”.

“How can a chief minister talk about giving away the state’s land when six policemen have died defending the state’s boundary? He is confused about whether he should give priority to his role as the chief minister or as the NEDA convenor,” Dev said.

The Congress leaders also visited the homes of the slain policemen, five of whom were from Barak Valley.