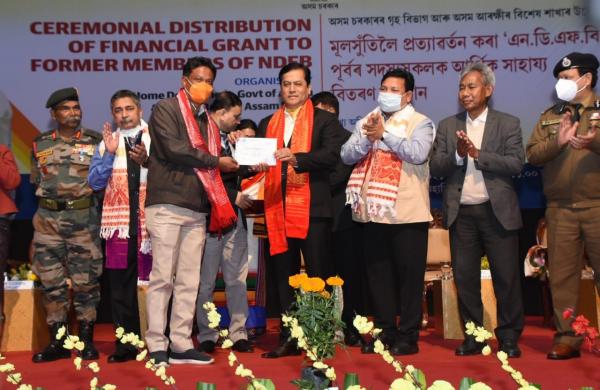 “A momentous day! Ceremonially handed over the financial grant of Rs 4 lakh each to 1,279 former NDFB cadres in Guwahati. I applaud their decision to return to the mainstream & believe that this grant will lead them to contribute further towards the growth of Assam,” Chief Minister Sarbananda Sonowal tweeted.

Speaking at a programme organised on the occasion, he lauded the former rebels for abjuring the path of violence and joining the mainstream for peace and progress of the state.

They were members of four NDFB factions which, along with the All Bodo Students’ Union, had come forward for the signing of the historic Bodo peace accord in January last year. These former extremists hail from 14 districts, including four from Bodoland Territorial Region.

As agreed, the Centre will offer Rs 1,500 crore for the development of Bodo areas. The package was announced by Prime Minister Narendra Modi in February last year.

Recently, BJP president JP Nadda said in Assam that the Modi government had protected Assam’s territorial integrity as it solved the Bodo agitation for a separate state.