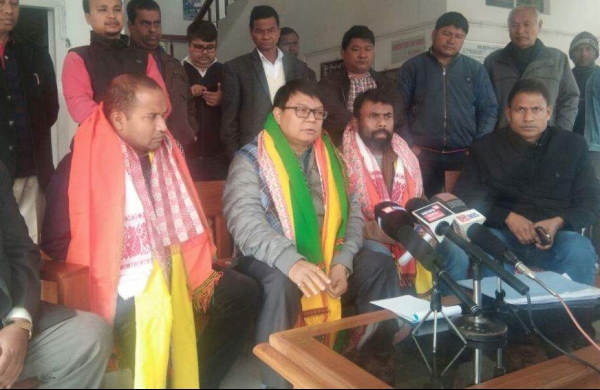 By Express News Service
GUWAHATI: As some 1,300 families, settled at a wildlife sanctuary before it was declared so, are facing eviction, Assam Congress Legislature Party leader Debabrata Saikia has petitioned the National Human Rights Commission (NHRC) alleging gross injustice being done to these people from ST and OBC communities.

In a letter to the Commission, Saikia said the government was seeking to evict the families by going back on its promises that they would be suitably rehabilitated.

They have been settled at the Laika-Dadhia area of Dibru-Saikhowa Wildlife Sanctuary in Tinsukia district after the great earthquake of 1950. Angry over the government’s move, they have been staging a protest from a makeshift camp outside the District Magistrate’s office for the past fortnight.

“Three protesters, including a pregnant lady and her unborn child, have died because they were unable to bear the chill of winter in the makeshift camp. Many other protesters are suffering from fever, nose-bleed etc,” Saikia wrote to the NHRC.

Based on a report that he claimed he acquired from the DM’s office, he said the families in question have been living in Laika-Dadhia since the 1950s long before the area was notified as a wildlife sanctuary.

The Congress leader also drew the Commission’s attention to the government’s move to evict people belonging to ST and OBC communities from Mikir Bamuni Grant in Nagaon district to hand over the land to a private solar power company. He said the affected families have been cultivating the land there as “ryots” since 1981.

He alleged the land was being handed over without any proper notification to the affected families.

“Many of them were given only one day’s notice to file their objections, if any. The simple ryots do not possess any documents, such as record of rights, regarding the land they and their forefathers have been tilling for almost four decades. However, the Assam (Temporarily Settled Areas) Tenancy Act, 1971 provides for bestowing of ownership rights on ryots who cultivate a specific plot of land for three years in succession,” Saikia wrote.

He claimed the land allocation was being done on the basis of a false claim that it is uncultivated.

“A farmer was killed by wild elephants in the area in 2018 and the government paid compensation to the family but the report submitted by local officials concealed the fact that the area is an elephant corridor in an obvious ploy to facilitate the land allocation,” Saikia said.

He alleged the “arbitrary” and hasty action of the government violated the legal land rights of the ryots. The affected people are protesting against this injustice, but their pleas have fallen on deaf ears, he further wrote in his letter.