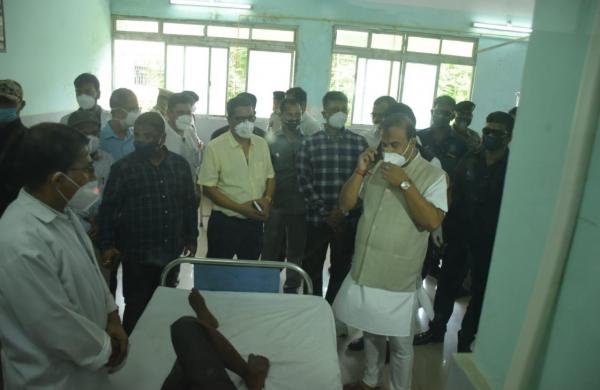 Himanta Biswa Sarma directed the doctors to ensure the best treatment to the injured police personnel and shift the seriously injured for better treatment by air ambulance on priority.

As many as six Assam Police personnel have died in an exchange of fire with their Mizoram counterparts, Assam Minister Parimal Suklabaidya said.

“A cordial talk with the Deputy Superintendent of Police (DSP) was underway after some men came to our side of the border when the Mizoram side started firing suddenly. As much as I know, the firing continued for at least 30 minutes,” he further said.

We are deeply anguished by the loss of lives of our brave @assampolice personnel.I visited Silchar SP Office and paid floral tributes to the five martyrs and salute their sacrifice. pic.twitter.com/Alj0l9sKmG
— Himanta Biswa Sarma (@himantabiswa) July 27, 2021

Expressing disbelief, the minister said, “We fail to understand the reason behind the move. We live in the same country. They have to cross Assam to enter other Indian states; Assam acts as a corridor to them. Our people never had a bad attitude towards them and still, they did this, we are still shocked.”

A war of words ensued between Mizoram Chief Minister Zoramthanga and his counterpart from the neighbouring state Himanta Biswa Sarma after the clash which led the Home Minister to intervene.

In reply to the tweet, Assam Police said miscreants from Mizoram were indulging in stone-pelting and attacking Assam government officials stationed at Lailapur to protect Assam’s land from encroachment.

Assam CM Sarma also replied and shared a clipping and said a superintendent of police from Mizoram was asking Assam’s officials to withdraw from their post, failing which civilians from the neighbouring state would not stop the violence. He sought immediate intervention from the Home Minister Amit Shah and the Prime Minister’s Office (PMO).

How can we run a government in such circumstances?” Sarma wrote.

Soon after, Mizoram CM Zoramthanga wrote to Sarma, “After a cordial meeting of CMs (chaired) by Shah, two companies of Assam Police with civilians lathi-charged and tear-gassed civilians at Vairengte Auto Rickshaw stand inside Mizoram today. They even overrun CRPF personnel/Mizoram Police.”

Zoramthanga shared another video with which he wrote that an innocent couple were “manhandled and ransacked by thugs and goons” on their way back to Mizoram via Cachar in Assam. “How are you going to justify these violent acts?” he wrote.

Mizoram CM Zoramthanga said that border disputes in the northeast are a legacy of the colonial era and lasting peace between states is important for further development of the region.