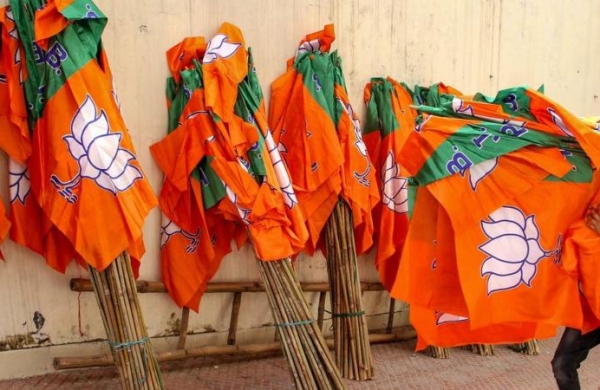 By ANI
NEW DELHI: The Bharatiya Janata Party will announce the list of its candidates for the first and second phases of the Ass am Assembly elections on Friday, said BJP Assam chief Ranjeet Kumar Dass. He also claimed that BJP and its allies would secure at least 100 seats out of a total of 126 seats in the state Legislative Assembly.

The party leaders informed that the list of BJP’s candidates that are going to polls in two phases will be announced by today evening.

However, the candidature of the seats that have gone to its allies Asom Gana Parishad (AGP) and United People’s Party Liberal (UPPL) will be announced by the respective parties later.

Speaking to ANI, Dass confirmed that the list of candidates will be out by today evening.

“The list of candidates for seats going to polls in first and second phases will come out today. BJP’s list will come out today whereas the AGP and the UPPL will declare their candidates after presidents of both parties announce the seat-sharing agreement which would be finalised very soon,” he said.

Dass also said that a detailed discussion on seat sharing and alliance took place on Thursday under the leadership of Prime Minister Narendra Modi and BJP chief Jagat Prakash Nadda.

“We had discussed 86 Assembly seats that will go to polls in two phases. We held discussions over seats of BJP, AJP and UPPL. We have left the AJP seats to them for the announcement. We have given them a satisfactory number of seats,” added the BJP leader.

“BJP and its allies would secure at least 100 seats out of a total of 126 seats,” he asserted.

ALSO READ: BJP, allies finalise sharing of 86 out of 126 seats

In 2016, BJP had won 60 of 84 seats it had contested. He also believes that the AGP will retain its 14 Assembly seats which it had won in the last elections.

“96 lakh people benefitted from government schemes. We can get 1 crore votes and out of 50 lakh members we have in the state and if they bring in one extra vote even then we get 1 crore votes. Total votes polled are approximately 1.60 crores and if we get 1 crore votes, who will form the government then? We have 60 seats plus add 14 seats of the AGP that it will retain,” added the BJP Assam President.

“We will add a few seats that were contested by Bodoland People’s Front in the last elections. We have a chance to touch 100 seats,” he added.

Out of 126 seats in Assam, 86 seats will be contested in the first two phases scheduled on March 27 and April 1 whereas the polling for the third phase will be held on April 6. The counting of votes will take place on May 2.

In 2016, the BJP scripted history and formed the government for the first time in the state ending Congress’s 15-year rule. BJP and its allies Asom Gana Parishad (AGP) and Bodoland People’s Front (BPF) won a combined 86 seats in the 126-member Assam Assembly. BJP bagged 60 seats, AGP 14 and BPF 12 seats.

This time the BPF announced to join the Congress-led coalition ‘Mahajath’ after breaking away with the BJP-led alliance.