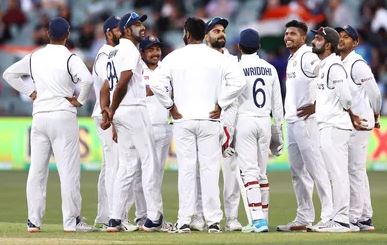 India got off to Australia on the first day – thanks to the amazing spin of off-spinner Ravichandran Ashwin (4/55) and fast bowlers Umesh Yadav (3/40) and Jaspreet Bumrah (2/52). On the second day from the night test, on Friday, he scored a significant lead of 53 runs in the first innings by covering 191 runs.

In this match being played with pink ball, India scored 244 runs in the first innings while the Australian team was reduced to 191 runs. Captain Tim Paine scored the most unbeaten 73 runs for Australia. India have gained a significant edge in this match, while at one time it seemed that the Australian team was dominating the match but the Indian bowlers made a great comeback after being reduced to 244 for six in the first innings by playing 233 runs. And kept the kangaroos on the backfoot constantly.

For Australia, Penn struggled unilaterally, trying to handle the Kangaroos’ innings and scored 73 not out with the help of 10 fours in 99 balls. Apart from Penn, Marnus Labuschen scored 47 runs in 119 balls with the help of seven fours. Apart from these two batsmen, no other Australian batsman could do Karisma. In Australia’s innings, Mitchell Starc scored 15, Cameron Green scored 11, Nathan Lyon scored 10 and former captain Steven Smith scored one run. For India, Ashwin took four wickets for 55 runs in 18 overs, Umesh took three wickets for 40 runs in 16.1 overs and Bumrah took two wickets for 52 runs in 21 overs while Mohammad Shami remained empty handed for 41 runs in 17 overs.