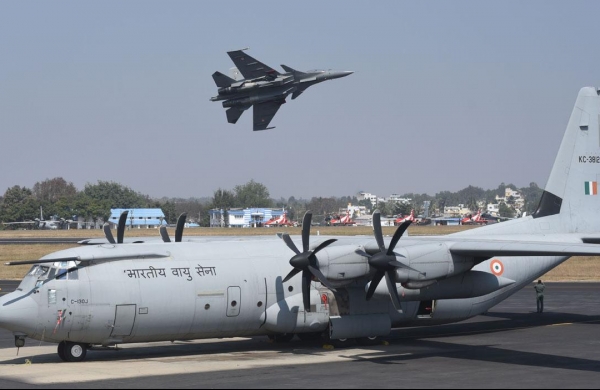 By Express News Service
BENGALURU: The three-day mega aerospace exposition Aero India 2021, held for the first time in the world in a hybrid mode amidst the pandemic, concluded on Friday evening with President of India Ram Nath Kovind emphasizing India’s ability and potential to be a manufacturing hub for the whole world.

In his valedictory address of the event, the President said India was not just a market but a land of immense opportunities for the whole world, and the three-day event would further help the country to establish itself as a global manufacturing hub.

This is the first time in the history of Aero India air shows that a President has physically attended the event since it began in 1996.

Terming the event an “unprecedented success”, President Kovind said the past year presented hardships due to the Covid-19 pandemic and its adverse impact was felt across the world. But despite the challenges, Aero India 2021 was held without compromising its spirit and by following all protocols. “It was an ideal place for exchange of ideas and forging partnerships,” he said.

Around 16,000 people attended the show physically, while about 4.5 lakh participated in it in the virtual mode, including participants in seminars as well as those witnessing the flying display. Due to Covid restrictions, the event was held only for three days — unlike five days in the past — and it was meant as a business event.

Over 500 companies, including 34 foreign firms, took part in the event, during which 201 MoUs were signed, apart from 19 transfer of technologies, 13 product launches and 32 major announcements. The MoUs were signed between domestic and foreign firms as well as state governments. The Indian Ocean Region (IOR) Defence Ministers conference and Chief of Air Staffs conclave were the highlight of theevent. Rs 203 crore worth orders were given to 45 MSMEs during the show.

While the emphasis of the show was on “Atmanirbhar Bharat” (or self-reliance), Defence Minister Rajnath Singh on Friday made it clear that by self-reliance they did not mean to be isolated from the world, “but actually seek to promote globalisation by making India a more competitive player on the global stage and inviting global companies to set up shop in India.”

“Aero India will help achieve a turnover target of Rs 1.75 lakh crore and Rs 35,000 crore in export of aerospace and defence products by 2024,” Singh said, adding that the government will invest US $130 billion over the next seven to eight years to enhance security.