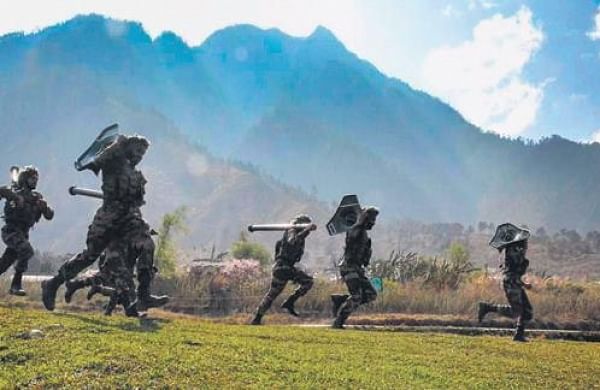 NEW DELHI: A letter written by the Chinese embassy to several Indian lawmakers for attending a reception hosted by the Tibetan Parliament-in-Exile triggered sharp political reactions on Friday, with a prominent parliamentarian slamming the mission for commenting on a matter in which it does not have a locus standi.

The Chinese embassy, in a letter to some of the members of the All-Party Indian Parliamentary Forum for Tibet, expressed concern over their attendance at the event and asked them to refrain from providing support to Tibetan forces.

Sujeet Kumar, the convenor of the forum, said the Chinese embassy has no locus standi to write to an Indian MP.

There was no immediate reaction from the government on the issue.

Generally, India does not approve of any foreign embassy commenting on the country’s internal matters.

The Chinese embassy’s letter came in the backdrop of strain in ties between the two countries following the eastern Ladakh border row.

Kumar, a BJD MP, said he himself has not received the letter but several other members of Parliament have got it.

“I personally treat the letter with the contempt it deserves. It is not the first time the embassy has written to me, it has written to me several times. The embassy does not have any locus standi to write to an Indian parliamentarian. If it had any issue, it could have written to the Ministry of External Affairs. It has violated the protocol,” he told PTI.

Underlining that the meeting of the Indian MPs with the Tibetan government-in-exile was not a political engagement, Kumar said it was aimed at promoting cultural and trade ties.

“We have not met the Tibetan government-in-exile on behalf of the Ministry of External Affairs or the Indian government. We attended the dinner as members of the All-Party Indian Parliamentary Forum for Tibet. Our meeting was aimed at promoting cultural and trade ties between India and Tibet.”

“The forum is advocating for the preservation of Tibetan art, culture and philosophy. We do not want to engage in political activities but wish to increase people-to-people interaction,” he said.

Kumar added that as an Indian citizen, he can express his views and so can other MPs.

He said the members of the forum do intend to visit Dharamshala in Himachal Pradesh and meet the Dalai Lama.

When contacted, Manish Tewari of the Congress, who is also a member of the forum, said, “My attention has been drawn to a report published in some English newspaper. Neither have I received any letter nor will I demean or diminish myself by responding to such imbecile missives. Had (Chinese Foreign Minister) Wang Yi written, perhaps I would have considered responding.”

After a failed anti-Chinese uprising in 1959, the 14th Dalai Lama fled Tibet and came to India, where he set up a government-in-exile.

Beijing has in the past accused the Dalai Lama of indulging in “separatist” activities and trying to split Tibet, and considers him as a divisive figure.

However, the Tibetan spiritual leader has insisted that he is not seeking independence but “genuine autonomy” for all Tibetans living in the three traditional provinces of Tibet.

Kumar, who was recently appointed as the convenor of the All-Party Indian Parliamentary Forum for Tibet, said the forum was almost defunct for several years, but it is being revived now.

“The forum was very active when late George Fernandes was its convenor. Later, I think it got defunct, it was not very active. Now, it is being revived. We have plans to visit Dharamshala and meet his holiness the Dalai Lama. We also want to talk about the cultural genocide in Tibet,” he said.

China on Friday defended the renaming of 15 more places in India’s northeastern state of Arunachal Pradesh, claiming that the southern part of Tibet is an “inherent part” of its territory.

India on Thursday strongly rejected China renaming 15 places in Arunachal Pradesh and asserted that the state has “always been” and will “always be” an integral part of India and that assigning “invented” names does not alter this fact.

“We have seen such. This is not the first time China has attempted such a renaming of places in the state of Arunachal Pradesh. China had also sought to assign such names in April 2017,” External Affairs Ministry spokesperson Arindam Bagchi said in New Delhi.

Asked for his reaction to India’s assertion, Chinese Foreign Ministry spokesman Zhao Lijian told a media briefing here that “the southern part of Tibet belongs to the Tibetan Autonomous Region of Chin and it has been China’s inherent territories”.

“People of different ethnic groups have been living in that area for many years and have given many names for that areas”, he said.

“For standardised management of the area, the competent authorities in China in accordance with relevant regulations have published the names for the relevant area. These are matters that is within China’s sovereignty”, Zhao said.

This is the second batch of standardised Chinese names of places in Arunachal Pradesh released by China.

The first batch of the standardised names of six places was released in 2017.

China claims Arunachal Pradesh as South Tibet which is firmly rejected by the External Affairs Ministry which has asserted that the state is an “inseparable part of India”.

China’s renaming of the places in Arunachal Pradesh came in the midst of the lingering eastern Ladakh border standoff that began in May last year.